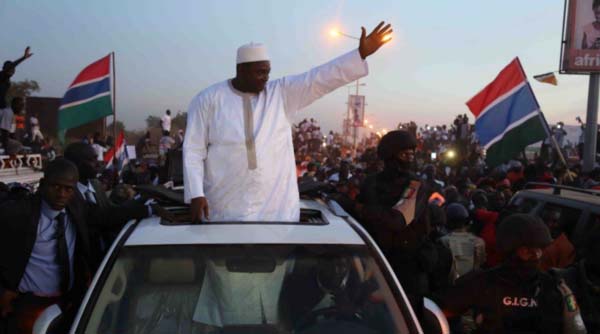 Tens of thousands of Gambians of all ages yesterday lined the streets from Westfield to inside the Banjul International Airport in Yundum to welcome home President Adama Barrow.

The president arrived in a white aircraft with the Ecowas logo at about 5pm, and was received at the foot of the aircraft by the only appointed member of his new cabinet, Fatoumata Jallow Tambajang, diplomats and other senior government officials.

The president took off from Dakar, Senegal, where he was sworn in as the third president of The Gambia on 19 January 2017.

Upon arrival at the airport, Mr Barrow said: “I am a happy man today.  I think the bad part is finished now.” He promised to put in place his cabinet and set to work in earnest.

“What we are witnessing here today is truly historic. Gambians have turned out in large numbers to welcome their president, and to ensure the take off of the government of President Barrow.” Mr Chambas said the United Nations working with Ecowas and other partners will continue to support the process to establish the necessary security for the new president, the vice president and the government and to allow a smooth transition from the past administration to this new one.

Jammeh rejected the result after initially accepting it, causing a political impasse in the country that lasted for about one and half month, and nearly plunged the country into war.

At the height of the political impasse, Barrow left for Mali, courtesy of Ecowas, then to Senegal where he was sworn into office at the Gambian Embassy in Dakar.

Thanks to the success of last-ditch mediation efforts, led by the presidents of Guinea and Mauritania, Jammeh eventually left power and went into exile with his family in Equatorial Guinea.

When Jammeh left, Gambians took to the streets to celebrate with music blaring from speakers and people dancing in the streets.