The Ministry of Basic and Secondary Education, in collaboration with UNICEF through the Non-formal Education Unit, on 6 June 2011 concluded a ten-day pre-service training for literacy facilitators from selected schools within the Central River Region held in Janjangbureh.

The training was done to empower mothers' clubs for their effective participation in school service systems.

According to officials, the training was meant to equip the facilitators with basic knowledge and skills to enable them conduct literacy classes for mothers’ clubs within the region.

Speaking at the opening ceremony, Alpha Camara, Principal Education Officer for Region Five, spoke at length on the importance of the training.

According to him, the MoBSE partners with UNICEF to train facilitators that would improve training mothers’ clubs on basic numeracy and literacy skills using the area languages such as Fula, Wollof and Mandinka.

“UNICEF gave seed money to mothers’ clubs which they used as a revolving fund, the proceeds from the seed money is what is being used to support the school system,” he said. “Improving adult literacy skills is a global and government commitment.”

Mothers’ clubs play a pivotal role in the improvement of student enrollment and retention in schools; thus promote and promulgate the activities and aspirations of the Programme for Accelerated Growth and Employment (PAGE) to reduce poverty through literacy improvement, he says.

For his part, Kebba Nyangado, Senior Education Officer who is also the Acting Head of Adult and Non-formal Education Unit, underscored the significance of the programme.

He noted that the MoBSE, in partnership with development partners, endeavours to provide support to the operation of functional literacy class as strategy within the framework of child-friendly school community initiative.

“This pre-service training of literacy facilitators was funded by UNICEF under the programme for improved quality standards in school in preparing the establishment of literacy classes in child-friendly schools within the region,” he said.

The programme, he said, targets mothers’ clubs within the furrows of the school improvement programme approach.

“The ultimate objective is to equip facilitators with the basic knowledge and skills to be able to conduct literacy classes for mothers’ clubs in empowering adult learners for meaningful participation in education service delivery,” he added.

He also said the quality and relevance of the literacy/numeracy programme will be in accordance with socio-cultural, economic, religious, health, agriculture, entrepreneurship and civic life as well as ecological characteristics of the region.

It is expected that at the end of the training facilitators would be equipped with the basic principles of adult education and adult psychology, methods and techniques of teaching assessment, among others.

Media Mballow, a participant at the training, also spoke on the relevance of equipping the mothers’ clubs to support the school system.

Mballow stressed that the training was very educative and interactive and a lot of things have been learned.

She assured the trainers that they would live up to expectations as envisaged in the programme. 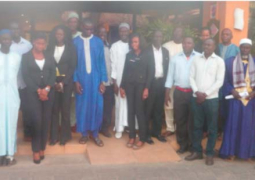