The Gambia Ports Authority were on 19 December 2015 held to a goalless draw by the Gambia Armed Forces in their week-four encounter of the Gambia Football Federation First Eco Partners first division league game played at the Serrekunda East Mini Stadium.

GPA, who were leading the league table prior to their meeting with GAF, are now on 8 points from 4 games while GAF have now collected 6 points from a possible 12 points.

Ports won two of their matches against Wallidan FC and Gamtel FC and drew against Hawks and most recently against GAF.

The kaki boys, on the other hand, managed a single win against Real De Banjul and drew their other three outings against Samger FC, Hawks and GPA.

GPA, who were the better side of the day, created plenty of opportunities but failed to capitalize on any.

With 15 minutes on the clock GAF’s Musa Keita was sidelined with what seemed to be an ankle injury and was therefore replaced by Samba Kujabi.

Skipper Matarr Ceesay, Modou Njie Sarr and Abdoulie Bah all had chances to register their names on the score sheet for GPA FC but failed to convert their chances.

Speaking to reporters shortly after the game, GPA’s coach Alagie Sarr said the game was difficult despite his side gaining the upper hand.

GAF’s Adama, for his part, said collecting a point against GPA wasn’t a bad result; rather it will help them go back and work on their weaknesses.

He said they are hopeful of winning their next game against Gamtel, saying their goal is to win the title this season. 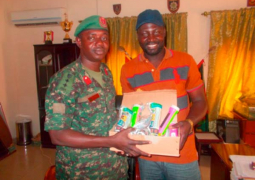