Momodou Colley alias Kunkung, Director of Physical Planning and Housing, yesterday continued his testimony in the trial of lawyer Moses B. Johnson Richards at the Banjul Magistrates’ Court before acting-Principal Magistrate Alagba.

Richards is being tried for the offence of giving false information and for sedition.

Continuing his testimony, Colley told the court that there was a panel formed that comprised former Chief Justice Savage, the late Director of the National Intelligence Agency (NIA) Pa Jallow, former Minister of Justice, Kebba Sanyang, Demba Sowe, director of operations at the NIA, one Pa Faye, also an NIA officer and himself as the principal execution officer at the department of Physical Planning and Housing.

He pointed out that the Inspector General of Police was being represented by one Commissioner Bojang, and Haruna Jaiteh, the then Judicial Secretary and one Hamidou Jallow, were all members of the panel.

Colley further revealed that the panel first held a meeting, which he attended, and formed a sub-committee to critically look into the issue of the court order regarding the village of Jabang, and to find  an amicable solution without any problem, and later report to the panel.

He added that upon their arrival at the village of Jabang, they were given a sketched plan before proceeding to the site.

“We went to the execution site with the said sketched plan, and the sub-committee found out that one portion of the sketched plan falls into a forest reserve, but further down in  the village of Jabang was where the execution took place,” he told the court.

He added that after the sub-committee prepared their report it was submitted to the main panel, and he has his original signed copy with him.

At that juncture, defence counsel A. Gaye applied to tender the said report in evidence, but this was objected to by state counsel M.B. Abeh on the grounds that it is a public document, and could not be admissible in evidence.

He added that the witness told the court that they were tasked as a sub-committee to make findings and report back to the general panel, which means the report had become a public document.

He said the proper foundation has not been laid for the admissibility of the document in evidence, and urged the court to reject the document.

In response, senior counsel A.B. Gaye told the court that the said report was from a proper custody, and the state could not object to the document without any tangible reasons.

The state counsel’s objection was later overruled by the trial magistrate, and the document was admitted and marked as an exhibit.

The case was at that juncture adjourned till 27 June 2011. 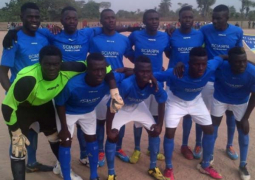