Not long ago climate change was thought to be an issue of the future – a problem that would most impact our great or great grandchildren, years from now. This is far from the truth. Climate change is happening now, and we’re seeing the impact on our health every day, in all regions of the world.

If the world continues on its current path, in just over 80 years the average surface temperature is expected to rise 4° Celsius. Chances are many children born today will be alive in 2100. As the earth warms up, we will see longer and more frequent heat waves like the ones this summer in Pakistan and India that took nearly 5000 lives and caused thousands of heat-related illnesses.

Hurricanes, cyclones, floods and wildfires, like those that have already burned more than 8 million acres in the western United States this year, will become even more frequent, putting human lives and livelihoods at-risk. We will see more malnutrition as droughts limit food production and floods destroy crops.

Changes to weather patterns will continue to cause changes to infectious disease transmission patterns resulting in more outbreaks of malaria, dengue and cholera. Of these, malaria is of greatest concern – as it is a major killer, and is highly sensitive to long-term climate change and varies by season in highly endemic areas. Just as we are beginning to reduce malaria cases and deaths, we risk seeing our successes reversed.

At the same time, many of the same inefficient and polluting energy choices that are driving climate change, are also devastating human health: every year over 7 million deaths from respiratory disease, cardiovascular disease and cancer are attributable to air pollution.

Our duty as health professionals

As health professionals, we have a duty to stop the impacts of climate change. While it may seem outside our scope of work, we are at the front line in caring for the health of current and future generations.

Here at WHO, we have already taken steps to make the voice of health professionals heard.

A year ago, more than 400 high-level health delegates from all regions of the world agreed unanimously that climate change poses “unacceptable risks” to global public health. But, we need to be louder. The world is still missing a legally binding and universal agreement on climate change.

In less than 2 months, an estimated 25 000 delegates will meet in Paris at the Conference of Parties (COP 21), also known as the United Nations Climate Change Conference, with the aim of adopting a treaty and committing to keeping global warming below 2°C.

We need to make sure the world knows the Paris treaty is a public health treaty.

“Now, more than ever we need the health community’s support.”

Winners of 2011 US Ambassador’s Debate announced 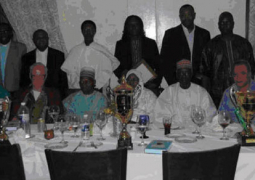