"The arrest, trial, conviction and sentencing of Mr. Peters is a direct assault on freedom of speech, the right to assemble and the free and unimpeded participation of political parties in shaping the political will of the people.

"This is guaranteed by the Constitution and recognised by the Election Decree and the Memorandum of Understanding subscribed to by all political parties in The Gambia," says lawyer Ousainou Darboe, the Secretary-General and party leader of the United Democratic Party (UDP).

Lawyer Darboe, who represented Femi Peters during his trial, was speaking yesterday afternoon at a press conference, organised by the UDP at the YMCA headquarters in Kanifing, on the imprisonment of Femi Peters, describing the case as "unprecedented in The Gambia."

Mr. Darboe posited that the Election Decree provides that political parties may be established to participate in the shaping of the political will of the people, to disseminate information of political ideas and or political, economic and social programmes of national character and sponsor candidates.

He maintained that the realisation of the objectives of this provision is dependent on the ability of political parties to organise without hindrance and disseminate their political, economic and social programmes without impediments.

"The Constitution of the Republic guarantees freedom of speech and the right to assemble and holding meetings.

"The Memorandum of Understanding, signed by all political parties in 2005, amongst other things, in effect reiterates the spirit and intent of Election Decree and Section 25 of the Constitution."

It does this "by enjoining signatories to the MOU to refrain from disrupting or frustrating the legitimate activities of other political parties, including the holding of the political rallies, meetings, marches or demonstrations," he stated.

Mr. Darboe said that the UDP in a bid to exercise the rights conferred on it by law and to make its existence as a political party had applied for police permits to use public address systems at its rallies.

According to the opposition leader, four of such applications were submitted by the party (not by Femi Peters) to the then Inspector General of Police (Ensa Badjie), but he did not acknowledge receipt of any of the applications.

In the view of the UDP leader, the effect of the IGP's conduct was to frustrate UDP efforts in carrying out its legitimate political activities.

"The UDP took the decision to conduct its legitimate political activities and, therefore, held a rally on 24th October 2009," he said, adding that the rally was organised by the UDP and the application to the Inspector General of Police clearly stated that it was the UDP that was seeking permission to use a public address system at the rally.

According to him, Femi Peters was subsequently convicted, after being denied the right to test the constitutionality of the law he was alleged to have violated.

"He was convicted after he was denied the right to freely choose whether he would give evidence in his defence or not. The magistrate deliberately ignored the 1998 ruling of the High Court that the provisions of the Public Order Act derogates from the Constitution of The Gambia," he added.

While the trial of Femi Peters was on, Darboe further stated, the ruling APRC party was holding meetings and rallies all over the country without applying for a permit.

?This discriminatory decision was decried by the High Court of the Gambia in 1998. What type of democracy are we practising in this country?? Darboe asked.

This, he added, is meant to give support to the APRC's campaign for "No Election" recently undertaken by the Governor of Western Region and others.

"The decision of the Inspector General of Police to prosecute Mr. Peters and subsequent conviction by the court should be seen by all those who value democracy and rule of law as a conviction of those very values, and of those who uphold and cherish them.

"Those of us who are walking in the streets are equally serving the sentence of imprisonment with him," he said. Omar Jallow, the interim leader of the People's Progressive Party (PPP), who was at the press conference to show solidarity, said what happened to Femi Peters is a violation of the Gambian Constitution.

"I am not happy to be here, as everybody knows. Gambians are now at a cross-roads," according to the opposition party leader, who is also known as OJ.

"It is unfortunate that we have found ourselves in such a situation. I will use this forum to appeal to all Gambians that let them not see Femi Peters as a UDP, that is why it is a UDP problem. This is not a UDP problem, it is a Gambian problem," he declared.

For Samba Bah, the representative of the National Reconciliation Party (NRP), what happened to Femi Peters could happen to anyone.

Mr. Bah spoke of seeing "our rights being trampled on," and not being able to do anything about it. Every Gambian, every concerned citizen, he said, should be aware of this situation, adding that, "we are operating in a situation where the law is not being observed."

"Opposition parties are denied the right to a permit, while the incumbent is enjoying the opposite. They don't bother to apply, yet they appear on a platform every minute and nothing happens to them. This is not democracy," he concluded. 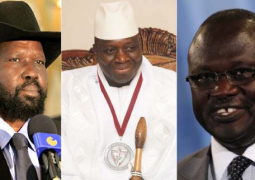