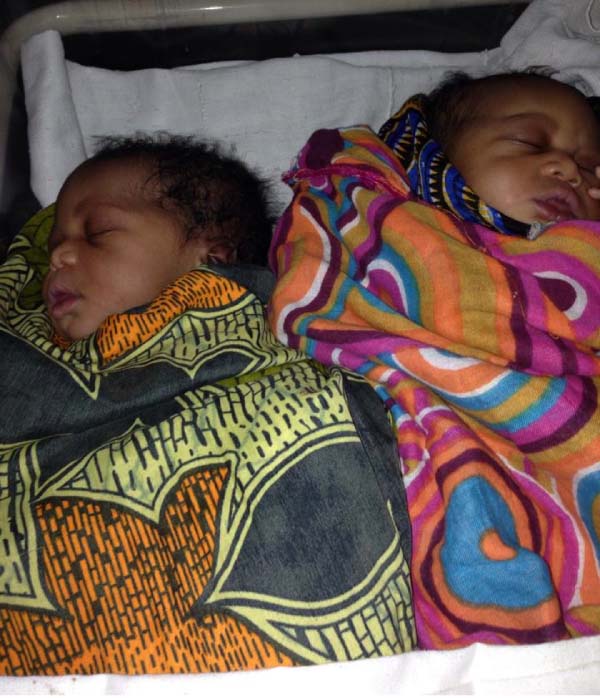 The first female twins for the year 2014 on Friday received a handsome donation of D100, 000 from the Operation Save A Baby committee, at a ceremony held at the Edward Francis Small Teaching Hospital in Banjul.

The committee, spearheaded by the First Lady Madam Zeinab Yahya Jammeh, earlier last week gave out a whopping D310, 000 donated by President Yahya Jammeh to the first babies of the new year.

The sum was presented to the babies by the Vice President Aja Dr Isatou Njie-Saidy.

The third baby, a male weighing 2.9kg, was delivered at 12.05am at AFPRC Hospital in Farafenni to one Isatou Bah of Ballangharr; whilst the fourth newborn, a female weighing 3.3kg was born 1:01am at Burusubi to one Ndaga Bah.

At Friday’s presentation to the first twins of the year, Salimatou Bah, the mother from Kiang Tattaba in the Lower River Region also received D30, 000 from the Gambia International Airlines.

Speaking at the handing over ceremony, Tombong Saidy, chairman of Operation Save A Baby, explained that the first baby was born at Sintet at 7.20pm on Wednesday 1st January 2014, but due to complications the mother was referred to the Edward Francis Teaching Hospital where she delivered the second baby the following day.

Saidy further explained that a total amount of D30, 000 will be given to the mother, while the rest will be deposited in an account at FiBank for the education of the children.

According to him, a fundraising drive will be launched to raise D10 million to support all the maternity wards of the health facilities countrywide.

She also used the opportunity to commend the Gambia International Airlines for the donation of D30, 000.

The Chief Medical Director Edward Francis Small Teaching Hospital, Dr Amar Jafari, lauded the Gambian leader and the First Lady for their support to the hospital and the health sector, in particular.

‘‘The GIA is willing, and will always support the initiatives of the First Lady,’’ Cham stated.