The third batch of rice agronomy corps members of the National Youth Service Scheme (NYSS) were recently administered an oath of allegiance at a ceremony presided over by the Secretary of State for Youth and Sports.

Addressing the corps members at the NYSS orientation camp in Bakau, the Secretary of State for Youth and Sports, Sheriff M.L Gomez, remind the corps members that by the service oath they are entering into a covenant with the scheme and the nation, to serve the entire people of The Gambia diligently, dedicatedly, conscientiously and above all, positively. He advised them to emulate the good example already set by the scheme as they performed their primary assignment. "Looking at the skill you have chosen to acquire, we are encouraged that the purpose for which the scheme was established will be fully realised. As you are all aware of the global food crises, having chosen Rice Agronomy will no doubt contribute to the increment of rice production and also to the socio-economic development of The Gambia," he said.

He implored the corps members make the judicious use of the opportunities offered by the scheme.

Mr. Musa Mbye, Executive Director NYSS, revealed that the batch is comprised of 19 young people, 16 males and 3 females, between the ages of 17 and 30 years from across the country. He said that the ceremony signaled the official admission of members into the NYSS and the formal commencement of the skills acquisition programme. He further revealed that the corps member will be deployed to the NYSS rice field to undergo a 22 month skills acquisition programme to enable them engage in viable ventures for self employment and job creation.

Speaking earlier, camp director, Miss Aji Fatou Nian, said that the orientation program is the period when new members are being put through a regulatory camp environment, endurance drills and physical exercise. 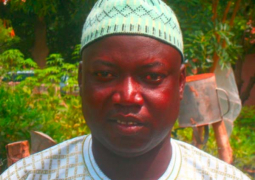