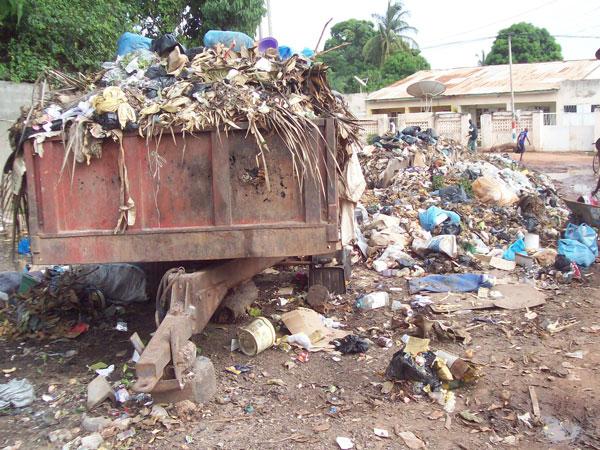 Dumpsites could be seen in secluded places around town and efforts have been made to assist residents in different areas to manage their waste but still prove to be very difficult. KMC Mayors have come and gone but it also remained a challenge for them. Dumping if not controlled creates sour eyes and poor health. Many think that the lack of managing society's refuse is due to the fact that children are not given enough training as to how to properly take care of refuse in their possession. Parents cannot take big or small bags full of rubbish to be dragged to the site for dumping. Children are seeing as the easy way out, who are given these heavy bags to drag and dump them in high containers. If their hands are short and have little energy they dump these bags. Let us read on and see what Society and Development finds our on the numerous dumpsites around town.

People who create their own sites to dump their waste end up crying foul for the stench that has created discomfort for them on a daily basis. Government sees health as paramount thus providing the machinery and positions for these dumpsites. The best that can happen to communities has happened by the provision of tractor containers that are packed at these dumpsites. Mayor Yankuba Colley came in with a fight against these refuse and to manage it in the best way possible. Tractors were provided for this purpose just after taking over as the KMC Mayor. Some trucks were placed in strategic positions for the same purpose. Here we see that the government through the Municipal Council provided the machinery necessary for such cleanliness of its citizens. The government further employs hard working men and women to manage these refuse but it has virtually been a challenge for them as well. Society should look through the problems at hand and look at the attitude of some the citizens of society.

Government has further put in place a stringent modality to help with the environment, that is by creating the National Environment Agency (NEA). This body has put in place the anti littering law and is poised to put it in place soon. One thing that is sure is that there are some people especially those who litter the street or dump refuse wrongly, are away from the news. They would need a lot of education either by their teachers or parents but this question will always remain, "would there be an alternative?" Talking about the laws to keep the city or country clean is a good thing to do but have we asked ourselves if materials are provided to enhance the dumping of these waste materials? Are parents ready to help their children to do throw the refuse correctly? Are the elderly ready to help if they themselves are to throw refuse? Will government provide more containers and make people come to collect these refuse in time before they over flow and consummate the whole street and its stench creates discomfort?

The garbage dumped virtually over power workers employed to man the garbage dumpsites. They have no alternative to the many illegal dumping done in their presence because they know that the trucks standing are over full and are left there for a long time with no option of throwing elsewhere but people create near the tiny trucks to keep throwing refuse illegally. But do these people have any way out? The answer is in the refusal of the garbage watchmen who say nothing but allow people to dump just where it is possible. Dumping areas have been expanding and the areas have been causing problem to inhabitants.

The individual has to share in the blame for dumping wrongly. Near many houses, one can see dirty materials wrongly placed instead of being dumped correctly. The sight of it brings dissatisfaction and ill health. But whom do we blame? Ousainou Bittaye at Bakau says, "Our houses are too close to where these rubbish are dumped but we should blame those who throw them there without thinking that it disturbs us. It virtually disturbs even those who throw these things wrongly. They should remember that those who pass by either in cars or on foot get the offensive stench that would kill any sick person. Cleanliness is next to Godliness all should be on the watch out,"

After situations have been keenly watched, one is left with no option but to advocate to all and sundry to do their best to clean their environment as though it is the "Set settal day" but how many people would love to avoid dumping wrongly.

People around Serrekunda West Mini Stadium are crying for their own wrong dumping in the corner of the stadium that has closed the road and a pool formed with the highest rotten smell that drives people away. They have now resolved to go through the stadium across to the other side. Patrick Kamiandor a resident of that area shouted in a loud voice against such illegal dumping. Young children dump there on the road in fear of going near the pool to avoid falling in it. This will continue if KMC does not step in time as they have done before.

Many people are suggesting that KMC, parents, schools and government formulate programmes to educate the community or the schools to educate children for proper dumping so that they would control their system of dumping that could not disturb the society. Furthermore, KMC should try to act promptly as they started to clear these waste. Not only to clear the place but also to know the times that are dangerous for dumping so that their machines and manpower would be there in time. The rainy season is such a time that can accumulate such unwanted rubbish. The council should therefore deploy more people, able body and willing men to carry out the cleaning exercise, without that the work will pile up and it would seem as though there is no one responsible. The council's work is tremendous, it is therefore important that the community support them to carry out their task. It is too bad to have neat citizens with unhealthy surroundings.

The Independent Stadium area is also crying for help as the smell has started reaching a record level and very bad water drain from it between the school, the stadium and the community. KMC, parents and children the ball is in your court as the government has provided the machinery you should put hands on deck to let it work for every ones benefit or else the anti littering law coming will grab you.

Previous:
Kaddijatou Fofana: In a class of her own
Next:
Muslim Hands Donates Mosquito Nets to Kotu Quarry