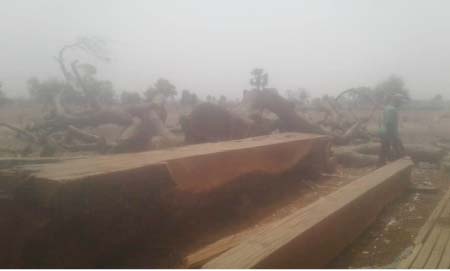 Chief of Nianija District in Central River Region (CRR) has convicted and sentenced three men after they were found guilty by a district tribunal on charge of unlawful felling of trees.

Chief Dawda York sentenced Demba Cham of Chamen Nianija to pay a fine of 8000 dalasis for felling a big tree and selling it without a permit. He ruled that Mr. Cham will serve three months imprisonment in default to pay the fine.

He also convicted and sentenced Abdoulie Jallow of Upper Niumi to pay a fine of 10, 000 dalasis in default to serve three months imprisonment for using a heavy machine to cut trees in Nianija without a permit. The tribunal also sized and handed over the machine to the Department of Forestry.

The third convict Gibi Lareh Cham, who is the alkalo of Chamen Nianija is also convicted and sentenced to pay a fine of D4000 for failure to stop his villager from cutting trees and failure to report such things to concern authorities. The tribunal ruled that if Mr. Cham fails to pay the fine, he will serve three months imprisonment and was warned to change attitude towards environment.

Chief Dawda York has been one of the most uncompromising chiefs when it comes to unlawful cutting down of trees. He has been emphasising the danger of felling trees and the importance of preserving the forest.

After handing down his judgement, Mr. York renewed his uncompromising stance in applying the wrath of the law on anyone found guilty of unlawful exploitation of the forest cover.

He warned alkalolu to distance themselves from the illegal act and advised them to protect the forest so that the next generation will not suffer.

Assistant regional forestry officer of CRR north, Lamin Saidy Bah and the forestry officer at Bakadaji, Kemo Kinteh both thanked the chief for helping the government in the protection of the forest cover. They also advised the people to distance themselves from illegally exploiting the forest or else forestry laws will be used against them.