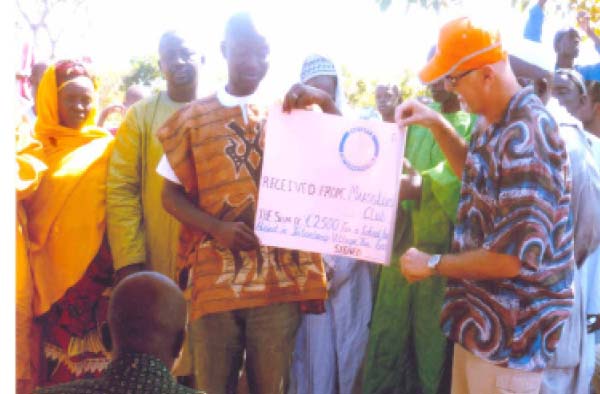 Maassluis Rotary Club of Holland has given a cheque for  €2,500 to the community of Jalanbang for the construction of a new school.

The cheque was presented at a ceremony held on Saturday at Jalanbang Village by Win Smit on behalf of the rotary club.

The project aims to provide access to education for the children of Jalanbang and its environs. Jalanbang is a small village compared to other villages located within its surrounding and as a result looks isolated.

Speaking at the handing over ceremony, Madi L.M. Bojang says the project marks another development for the community of Jalanbang.

"If a school is built in Jalanbang it will help the children who travel all the way to Brikama," Mr Bojang said, while thanking Mr Smit on behalf of Maassluis Rotary Club through the coordinator of the project, Muctarr Y. Bojang.

Lamin Jatta, the Alkalo of Jalanbang, said the project had brought delight to all the people of the village. "The project is another milestone in the community; it will contribute to the development of not only the settlement but the country as a whole," he added. "President Jammeh is interested in development initiatives such as the building of schools for children to learn."

Mr Bojang said that most of their children walked long distance to acquire education, "which makes the project even more timely and relevant".

"I want to assure you that we are happy for this project coming into this village, and I must also assure you that this money will be put into good use for the betterment of our children," he said.

He thanked Mr Smit and the rotary club, as well as its project coordinator, for  bringing such an important development to Jalanbang.

The link between the rotary club and the people of Jalanbang will henceforth go from strength to strength, he says.

For his part, Mr Smit, who spoke on behalf of the rotary club, thanked the people of Jalanbang for the warm welcome accorded him and his club.

He assured the community that the relationship between the club and the people of Jabanbang would remain cordial.

According to him, the club had raised a lot of money to build Kampama, saying that they believe that bringing funds to The Gambia for development projects is a good and wise decision.

"We have a lot of companies who help us to raise this money," he explained. “"We want this project to progress. People need good living; that's why we initiated this project."

Mr Smit assured the people of Jalanbang that his club would do its best to see the development of the village in education and other sectors.

In his remarks, Dembo Kelang Bojang, Chief of Kombo Central,  thanked the rotary club, through the project coordinator for the new project, saying they are always welcome in The Gambia

President Jammeh’s aim is to take education to every corner of the country, he says, adding that  the Gambian government is always ready to work with development partners to develop the country.