Deputising for the Major General Lang Tombong Tamba, Lt. Col Yankuba Drammeh has advised the departing officers to to maintain neutrality and impartiality during their tour of duty in their mission areas.
Lt. Col Drammeh was speaking at the farewell ceremony of 23 police officers that were to be deployed to for the peacekeeping mission under the United Nations ticket.

He said peacekeeping missions are an important task noting that you are there to protect the life and the properties that are the keys of life. He further advised the departing officers to have respect for the culture of the people in their various mission areas.

He pointed out that the peace keeping mission is a very risky and that the departing officers should try to work with their contingent commander so as not to face any risky conditions during their tour of duty.

He said The Gambia was well recognised in terms of peace keeping missions in the world and the officers are always ready to work when the need arises. He therefore advised the departing officers to know where to go and where not to go.

He therefore advised them not to involve themselves in any misconduct which would tarnish the image of the country. "I have no doubt in my mind that the officers will fulfill the expectations and represent The Gambia very well. Mr Jammeh therefore wished the departing officers good health and maximum strength to be able to carry out their duties to the best of their ability. 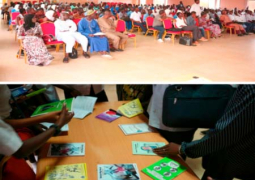