The training centred on retrofitting, recycling and control of Ozone depleting substances (ODS).

The ODS are refrigerants that are emitted from refrigerators, freezers, and air conditioners that deplete the gaseous ozone layer that serve as a protective shield for the planet earth from the hot rays from the sun.

According to officials, the move shows the Gambia Government’s commitment to phasing out the importation and consumption of ODS as enshrined in the Montreal Protocol and the Vienna Convention of which the country is a party.

In his opening remarks, the Deputy Governor of URR, Momodou S. Jallow, disclosed that the Ozone layer is the primary protection the earth has from the harmful rays of the sun, as the Ultraviolet radiation from the sun has adverse effects on human and animal health, marine and terrestrial ecosystems.

Mr Jallow however revealed that the continuous emission of Chloro-Fluoro-Carbons (CFCs) would deplete the ozone layer and this would result to more severe environmental and health problems.

Recognizing the vulnerability of human beings, Flora and Fauna to ODS, Jallow said, the Government of the Gambia through the NEA has over the years taken giant steps towards the reduction and ultimate elimination of ODS through a number of measures including the training of refrigeration technicians.

Momodou Mendy, trainer at the Gambia Technical Training Institute (GTTI), said the training aims at strengthening the capacity of refrigeration technicians to enhance proper identification, use and detection of ODS from the points of entry to the end users.

He therefore called on the trainees to lead the fight against the use, trade, smuggling and illegal entry of these chemicals that deplete the ozone layer in country.

In his keynote address, the NEA`s Programme Officer for ODS, Alhagie Sarr, said refrigeration technicians are targeted because CFCs, the main source of ODS in the Gambia, are found in refrigerators, air conditioners, foams and aerosols.

He disclosed that the workshop was one of series of activities towards meeting the ’s international obligation in phasing out the consumption and production of ODS.

He disclosed that over 120 refrigeration technicians have been trained countrywide on refrigeration handling, recycling, recovery and environmentally sound techniques, and over 100 security officials (Customs, Police, Soldiers, Immigration, NIA, Phytosanitary) have been trained and provided with substance identifiers for monitoring and control of ODS at different ports of entry of the country’s borders.

Sheikh Alkinky Sanyang, Environmental Education and Communication Officer at the NEA, says nature is at conflict with human beings.

He appealed to participants to use environmentally friendly materials, activities and devices to make the planet earth a suitable and lasting place.

The URR Regional Environment Officer, Sisaho Jarju, urged the trainees to take and advocate for ownership of the environment, positive attitudinal change and unflinching commitment towards environmental protection, preservation and conservation.

These three-day training that attracted over 30 participants drawn from the Region is among series of its kind conducted and organised by the NEA throughout the regions in the country. 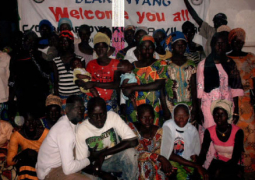