At a two-day intensive sensitization training workshop for the National Assembly Members Select Committee on Environment and Agriculture held recently, lawmakers of The Gambia declared an all-out war against the depletion of the ozone layer by joining ranks with the National Environment Agency (NEA) and UNEP in raising their voices against this and other environmental problems.

Welcoming the lawmakers to this unique cross-learning dialogue, the Director of Inter-sector Services Network (ISN) at the NEA, Momodou Jaama Suwareh, said the atmosphere is a very important resource for mankind and other living things on earth.

“It houses the ozone layer which protects life on earth from ultraviolet B. radiation. This radiation from the sun reaches the earth as a result of the refrigerants we use in our air conditioning systems, refrigerators, freezers and in fish processing factories.

“These refrigerants do not only deplete the ozone layer, but contribute immensely to the warming of the earth and the atmosphere that surrounds us,” Mr, Suwareh added.

A depleted ozone layer, he said, leads to increase in skin cancer, eye cataracts, suppression of our immune system; reduction of crop yields and kills phytoplankton, the basic foodstuff of marine creatures like fish, which could eventually lead to a drastic decline in the fish population throughout the world.

Dilating on the political will, Director Suwareh revealed that the Gambia government ratified the Montreal Protocol in 1990 leading to the successful phase-out of all chloro-fluoro-carbons (CFCs), from The Gambia by 31st December 2009.

This does not call for complacency, he warned, noting that there exist a high possibility of illegal smuggling and trade in ozone depleting substances (ODS) thereby posing a big challenge to curb the menace.

In a bid to ensure that the CFC phase-out is sustained, the National Ozone Unit of the National Environment Agency with support from the United Nations Environment Programme, UNEP, has trained over three hundred refrigeration technicians, and established Refrigeration Technicians Associations in seven regions of The Gambia; whilst over two hundred customs and other security officers have also been trained and certificated, he added.

The said associations have also been provided with modern tools and equipment for the recovery of ozone depleting substances, as well as the retrofitting of old refrigeration appliances with ozone-friendly refrigerants, he said.

To ensure a continuous monitoring of illegal trade of banned refrigerants, major customs entry points across the county have been supplied with refrigerant identifiers to test any suspected refrigerant canisters, he added.

Suwareh said the NAMs training session was part of an ongoing institutional, academic and media sensitization and awareness creation programme using different outlets to reach out to the grassroots, on the protection and preservation of the ozone layer and the atmosphere as a whole throughout the country.

“We shall be judged by what we have done to protect our environment and; therefore, to protect us and generations yet unborn it is incumbent on us all to plant more trees, use ozone-friendly refrigerants, educate each other on the dangers associated with the use of ozone depleting substances and atmospheric pollutants,” Suwareh told lawmakers at the Tranquil Resort Hotel.

According to Samba Bagie, NEA`s programme officer for ODS, it was as a result of the Gambia government’s unrelenting commitment to both the Vienna Convention and Montreal Protocol that the government was two years ago awarded a plaque in recognition of her vital role in the protection and preservation of the ozone layer by UNEP.

Furthermore, Bagie went on, “we shall be judged by what we have done to protect our environment, particularly the atmosphere that houses the ozone layer.”

It is, therefore, incumbent on all to plant more trees, use ozone-friendly refrigerants, stop the burning of fossil fuel and educate each other on the dangers associated with the use of ozone depleting substances and atmospheric pollutants, he added.

The chair of the Environment Select Committee, Hon. Ousman Bah, enjoined his colleagues to retreat back to their electorates and sensitize them on what was learn during the course of the training session.

He assured the NEA of the National Assembly’s unflinching support and collaboration in the elimination of substances that deplete the ozone layer.

As lawmakers, he said, no stone would be left unturned in their quest to make sure that only the right and applicable substances would be allowed to enter The Gambia. 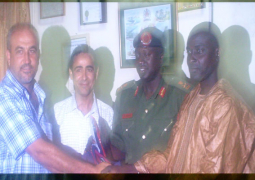