The 2009 Ndofan Senior Nawettan Championship League has kicked-off over the weekend, at Ndofan Football Field.

Vitalait FC clashed with Joko FC in the opening encounter which ended 2-2, and the most awaited game attracted a multitude of spectators from Ndofan and its surrounding areas.

The winner of the championship will bag with a trophy and a cash prize, while the runners-up will also receive a consolation prize.

The championship is being sponsored by Musa Njie of GFA. 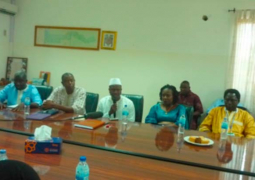