As part of efforts to control the drug trafficking and related offences in the country, the National Drug Enforcement Agency (NDEA) recently arrest ed six people in three different places within the West Coast Region.

Speaking at a press briefng held yesterday at its main office in , ASP Abdoulie Ceesay, NDEA public relations officer, revealed that the agency made the arrests in the West Coast Region.

Sanna Kujabi was stopped and the bags searched, and they found 20 bundles of suspect cannabis, with each bag containing 10 bundles.

Sanna Kujabi was later arrested, and the officers later conducted a search at the other side of the bridge in the Casamance region.

A pedal bicycle was found abandoned on the ground with another two bags, each containing 10 bundles of suspected cannabis.

The bags were later taken to Sifoe village police station for further action, with the suspect in the custody of the NDEA and charged with possession, the NDEA PRO said.

Asked by the journalists about the consequences, he added that the Drug Control Act makes it very clear that anybody found  possessing more than two kilo grams of prohibited drugs  will be charged, and if convicted fined nothing less than D1 million or in addition face a prison term of 10 years.

PRO Ceesay further revealed that, on 31st January 2011, when NDEA officers were on their normal patrols, one Mustapha Jobe a resident of Brufut arrived at a checkpoint carrying nine bundles of suspected cannabis.

He was asked to alight from the vehicle and was arrested and escorted to the police station. Mustapha later revealed that he got the suspected cannabis from somebody in Gifaga village.

In a separate development, the NDEA officers, on 26th January 2011, received a tip-off that one Lamin Darboe a native of Salkeni village had in his possession a bag containing suspected cannabis with intent to smuggle the illicit drug into the village, which is in the North Bank Region.

Narcotics officers were dispatched to a crossing point through Boiram village to Salikeni village. The suspect requested the services of two men, Alieu Dibba and Musa Touray, who came with a canoe to help him, and they were all subsequently arrested. Lamin Darboe later revealed that he owned the bag containing the suspected illicit drug.

Meanwhile, one Kaddy Tamba of Bullock village in the West Coast Region believed to be in her 40s was also arrested on 30th January 2011 in the village with a bag containing six bundles of suspected cannabis. She is in the custody of the NDEA, charged with possession.

“As far as NDEA is concerned, we have zero tolerance for drug trafficking in the country, and no one is exempted. So let us put all hands on deck and cooperate with the officers, especially in the area of information. Because we are not angels; we cannot know everything that happens within our localities. We expect and urge the general public to cooperate with us, because at the end of the day we are all doing it for our good; we all know the implications of drugs in our society”, the PRO called on the public. 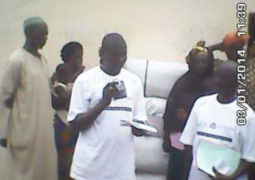