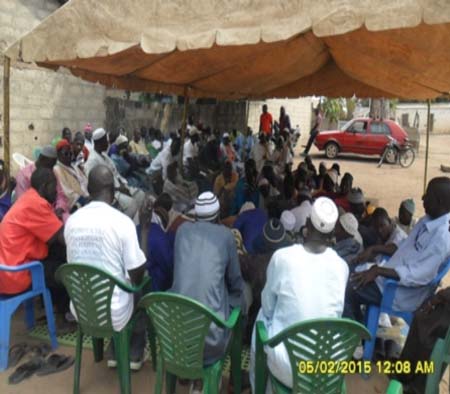 Speaking at various sites, the NCCE programme officer, Yusupha Bojang, spoke at length about the significance of this exercise, explaining that democracy is a form of government under which the power to alter the laws and structures of government lies ultimately with the citizens.

Under such a system, legislative decisions are made by the people themselves or by representatives who act through the consent of the people, as enforced by elections and the rule of law, he said.

According to him, traditionally the purpose of democracy is to prevent the accumulation of too much authority in the hands of one person or a few, adding that it rests on a balance of giving enough power for “vigorous and energetic government” and avoiding giving out so much power thatit becomes abused.

“Democracy creates a system where the public can remove administrations without changing the legal basis for government. Democracy aims at reducing political uncertainty, and assuring citizens that however much they may disagree with present policies, they will be given a regular chance to change those who are in power, or change policies which they disagree with, “he added.

Bojang further said democracy is also related to the idea of constitutional government, setting limits beyond which a current majority in government may not step.

The NCCE civic education supervisor, Ansumana Yabo, spoke at length on representative democracy and democracy in society and state.

He noted that one emerging problem with representative democracies is the increasing cost of political campaigns, which tends to lead the candidates into making deals with wealthy supporters for legislation favourable to those supporters once the candidate is elected.

According to him, defining democracy in this way makes two things clear at the outset.

The first, he said, is that democracy does not just belong to the sphere of the state or of government, as we usually tend to think of it.

Yabo pointed out that democratic principles are relevant to collective decision-making in any kind of association, adding that there is an important relation between democracy at the level of the state and democracy in the other institutions of society, among others.

Dwelling on Constitutionalism and Democracy, Junkung K. Saidy, a civic education officer, explained that the participatory processes that lead to the development of the 1997 Gambian constitution gave the citizens the opportunity to have a say in how they should be governed.

Saidy also said the constitution calls on all citizens to defend it at all times to any extent reasonable and justifiable.

Kebba O. Jobe, also a civic education officer, spoke at length on patriotism, citizenship and the rule of law, among others.

Patriotism involves a lot of goodwill and sacrifice on the side of the individual in order to do service to his/her country, he said.

Without patriotism, he added, a lot of things would go wrong in society because the state or anybody else could not pay for a lot of the things which we do.

“We do them simply for the love of our country,” he said.