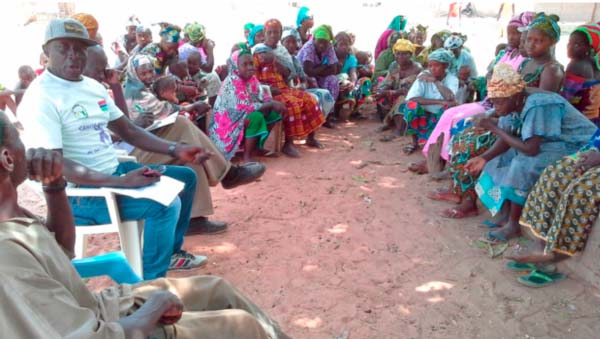 The National Council for Civic Education (NCCE) at the weekend concluded a ten-day community sensitization exercise in Upper River Region (URR) on “Citizens’ Participation in Governance and Politics”.

The NCCE funded the sensitization activity conducted in various locations, as part of their routine exercise to enlighten the masses on the Council’s role and responsibilities in governance participation and politics.

Speaking at the communities of Banico Ismaila and Girobo, Mr Junkung Saidy, senior officer of the NCCE, said the exercise was part of their on-going efforts at cultivating an environment of democratic continuity in The Gambia that would enable all citizens to fully participate in the governance process of the country, through the promotion of political and civic consciousness.

The promotion of rights and freedoms of all citizens is in accordance with the constitution of The Gambia and other regional and international legal instruments to which The Gambia is a signatory, he said.

According to Mr Saidy, the themes discussed in the exercise included democracy, governance, politics, citizenship, civic participation, and civic responsibility.

He quoted Section 39 of the constitution, which says citizens of The Gambia who are 18 years and older andin sound mind shall have the right to vote for the purpose of election of a president and member of the National Assembly and local government election hence shall be entitled to be registered as a voter.

He also quoted Section 26 of the same constitution which states that every Gambian of full age and with the capacity shall have the right without unreasonable restriction to take part in the conduct of public affairs directly or through freely chosen representative; to vote and stand for elections at genuine periodic election for public officer, which election shall be by universal and equal suffrage and be held by secret ballot, and to have access on general term of equality to public service in The Gambia.

NCCE’s Senior Programme officer Ansumana Yabo, speaking at Kumbija on the establishment and mandate of NCCE, said civic education in The Gambia is perceived as a process through which the citizenry acquires knowledge, skills and values that are needed for effective democratic citizenship.

It is based on the perception needed to promote the civic consciousness of the citizens, he said, adding that the 1997 Constitution provides for the establishment of a Civic Education Programme for the enlightenment of the society on civil matters.

He said NCCE is mandated to work with the citizenry as it works with government and promotes such programmes at national, regional and district levels aimed at realizing the objectives of the constitution.

Kebba Jobe, NCCE civic education officer, said the NCCE was created as an independent non-partisan council under the constitution, to design and coordinate civic education programmes and to serve as the advocacy component to the National Governance Programme.

“The Act thus places responsibility on the council for sensitization, information and education of the citizenry, particularly at the grassroots, of their rights and responsibilities under the constitution,” he said.

“Participation is the key role of citizens in democracy,” he said, adding: “It is not only their right, but it is their duty.”

He also said citizens’ participation may take many forms, including standing for election, voting in elections, becoming informed, debating issues, attending community or civic meetings, being members of private voluntary organizations, paying taxes, and even participation to build a better democracy.