The national organizing committee (NOC) for the 2012 National Youth Conference and Festival (NAYCONF) was on Thursday inaugurated at the Paradise Suites Hotel.

The committee needs 2.8 million dalasi to cater for one thousand five hundred delegates from across the country and beyond.

The funds will be used for their accommodation, feeding, transportation, health care, conference logistics, trophies and so on.

In his inaugural statement, on behalf of the minister of Youth and Sports, Musa Mbye, deputy permanent secretary responsible for youth commended the members for accepting to serve in the committee.

He informed the gathering attended by youth representatives, partners of the NYC, regional authorities and committee members, that in the build-up to the biggest national youth gathering, both the national and local organisng committees were established to ensure a successful NAYCONF.

He called on all stakeholders to come on board to ensure a very successful and hitch-free NAYCONF.

He urged the NOC members to begin regular consultations such as meetings before, during and after the event to ensure its success and their accountability for their roles.

In his welcome statement, the out-going executive secretary of the National Youth Council (NYC) Marchel Mendy, stressed that without a good NOC there cannot be a successful NAYCONF, thus the need for the committee.

Presenting the 10th edition of the NAYCONF concept, Fabakary Kalleh, chairperson of the NYC governing council, said the theme for this year is ‘directing and re-orienting youth participation towards the productive sectors of the economy.’

“The event would be held in the Central River Region from the 14th to 22nd December 2012,” he announced.

According to him, the objectives of the NAYCONF include to accelerate youth participation in the productive sector for employment creation, and attainment of food security.

“It also seeks to promote youth entrepreneurship by affording the youth the opportunity to exhibit their hand-made products,” Kalleh further remarked.

The CRR event, he said, would also map out strategies to address issues and challenges relating to the risk of drug use, alcohol abuse and HIV/AIDS.

Deputy Governor of CRR Malang Saibo Camara commended the authorities and young people for choosing the region to host this year’s NAYCONF.

He assured them of their commitment to ensuring a smooth, memorable and successful NAYCONF, noting that they have also gone far with the preparations at the local level.

Raymond Njie, public relations director of Social Security and Housing Finance Corporation, one of the few institutions that have so far declared support for the 2012 NAYCONF, said youths have a significant role to play in national development, thus the need to support them.

Bakary Badjie, chairperson of the conference sub-committee, in delivering the vote of thanks assured all of their resolve to have a successful NAYCONF.

Meanwhile, as part of the event, individuals and institutions made pledges in cash and kind as part of their support to the 2.8million budget.

The organizers are calling on the public to come forward and make donations as they say at the event, hosting over one thousand and five hundred people for a week is a daunting task. 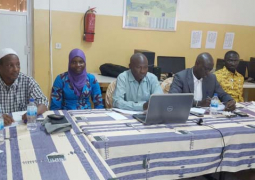