The staff of the National Water and Electricity Company (NAWEC) over the weekend converged at President Jammeh's rice farm in Kanilai for a harvesting spree.

According to Pierre Sylva, the Public Relations Officer of NAWEC, over three hundred workers from all sections of NAWEC thronged at the President's farm.

"You may be aware that NAWEC is under the Ministry of Energy and is headed by His Excellency Prof Dr. Yahya A. JJ Jammeh. Therefore coming to his farm is a venture geared towards complementing his effort to get enough food for Gambians," Sylva said.

Pierre Sylva pointed out that their purpose of coming to the farm is to get the staff of NAWEC to know each other for a common purpose.
"As you are aware that we have many installations across the country, there is need for knowing each other," he said. Sylva said it is an opportunity for companies existing in this country to meet together to share ideas and promote good working relationship.

Pierre Sylva urged people not to see the "President's idea as political but an encouragement to eat what they grow".

"NAWEC will continue promoting the activities of agriculture that will ensure the President to achieve his objective. We are aware that the APRC government is engaged in three main areas, which include agriculture, health and education. We recently handed over a refurbished ward at the RVTH," he said. 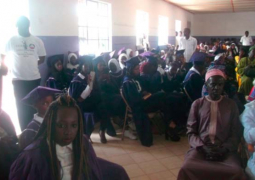