The Ministry of Health and Social Welfare and partners will today commence the first round of a national polio immunization for children.

The information was revealed to journalists at a briefing jointly organized by Rotary International, Center for Disease Control and Prevention, UNICEF and WHO.

The press briefing on the polio campaign was held at the National Malaria Control Program (NMCP) in Kanifing.

Speaking at the ceremony, Rohey Njie from the Health Education Unit said National Immunization Days are special days set aside to immunize all children, from 0-5 years, in the against the disease.

"This year, an estimated 391,425 children will be vaccinated during National Immunization Days (NIDs) within the country.

She stressed that there is no cure for polio so far, but added that the disease can easily be prevented through vaccination.

"Vaccinators will be moving from house to house to administer the vaccines to children of 0-5 years," she announced.

The public health official called on the general public to give them support during the polio campaign. The campaign, she said, is costing the government and partners millions of dalasi.

Pa Ousman Manneh, a representative of UNICEF, told journalists that UNICEF has been working very closely with partners to promote the health of children.

He urged the public to cooperate with the health officials during the campaign, since vaccination is free of charge for children of 0-5 years.

The Health Promotion Officer WHO Banjul Office, Momodou Gassama, said polio is a disease caused by a germ, which kills or cripples mainly children under 0-5 years.

According to him, the only weapon for polio prevention is vaccination.

Mr Gassama further said that the signs and symptoms are mainly fever, which can quickly progress into weakness of the limbs, and the affected limbs remain paralyzed for life.

He urged the parents to make sure all their children between 0 and 5 years are not missed by the vaccinators.

According to him, 17 countries in the ECOWAS region are doing this together to prevent polio, and they launch it every year.

Meanwhile, the first round of the campaign will start from 25th  to 28th March, while the second round will be held between 22nd and 25th April 2011. 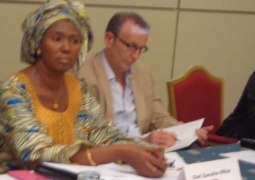