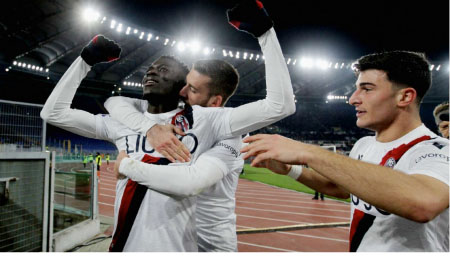 Scorpions’ striker, Musa Barrow has scored two goals during Bologna 3-2 away win over AS Roma in their week twenty-three fixtures of the Italian Serie A played at the Stadio Olimpico on Friday.

The 21-year-old scored his side’s brace in the 26th and 51st minutes and setup an assist to Ricardo Orsolini’s opening goal in the 16th minute.

His Friday performance truly signified the introduction of himself to Bologna fans as he bagged the Man of The Man award with his two stunning goals and assist.

Stefano Denswil’s own goal in the 22nd minute and Henrikh Mkhitaryan goal in the 72nd minute registered the two consolation goals for the Capital-based side, AS Roma as they lost at home.