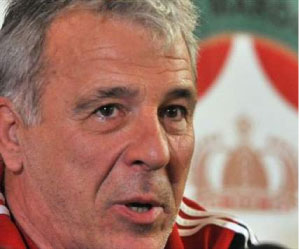 Following his side’s 1-1 draw against The Gambia in the opening of the 2014 World Cup qualifiers played at the Independence Stadium in Bakau on Saturday, the head coach of Morocco, Eric Gerets, has denounced the central referee for not awarding his side a penalty in the game after striker Belhanda was brought down inside The Gambia’s eighteen-yard box.

Gerets made his feelings known at a press conference at the Independence Stadium shortly after the game.

The Morocco coach stated that his side played extremely well and created several goal-scoring opportunities but they failed to capitalize on their chances.

“There is no small team in the continent and all teams are good,” Gerets averred, saying their aim was to collect the maximum points but they managed to share the spoils.

The head coach of The Gambia, Luciano Mancini, said he was really impressed with the performance of his boys despite their 1-1 draw against the Atlas Lions of Morocco.

According to Mancini, Morocco is a household name in African football and they have qualified for the World Cup on many occasions, adding that collecting a point against them is a good result.

He applauded the players, the Gambia Football Association (GFA), the Ministry of Youth and Sports, and the fans for their support.

The Scorpions Captain Mustapha Toubabo Jarjue said there is need to have more senior players in their set-up to adequately compete with other countries in the qualifiers to qualify for major competitions.

Toubabo said the Moroccan team is blessed with good and experienced players while The Gambia have few senior players; that was why it was very difficult for them to contain the Moroccans in the game.

Toubabo also asserted that their target was to bag the maximum points against Morocco and the second-half goal was as a result of a defensive blunder.

He as well promised that they would improve on their weaknesses ahead of their next games against Tanzania on 9 June 2012 in Daru Salam and Algeria on 15 June 2012 in Algiers.