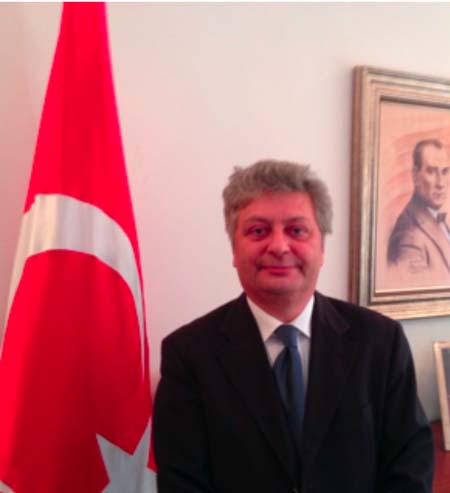 The signing ceremony for 2015 projects to be funded by the Standing Committee for Economic and Commercial Cooperation of the Organisation of Islamic Cooperation (COMCEC) was held at the Ankara Palas Hotel, in the Turkish capital on 30th March 2015.

Ambassador Soner added that today’s political and economic challenges also influence the Islamic world to a great extent. According to him, economic and political fluctuations cause instability and give rise to a larger gap between the poor and rich. In return, the cooperation instruments gain significance in coping with the social and economic impacts of these fluctuations.

He went on to say that the OIC member states have at their disposal the COMCEC as one of the main instruments of their cooperation.

He recognised that the formula offered by the COMCEC to reach its members’ potential is to deepen their coordination on the priority cooperation areas of trade, tourism, agriculture, transport, finance and poverty alleviation, in order to build a better standing in the global economy.

He stated that, COMCEC which has been established with a view to improve economic and commercial cooperation among member countries and bring these countries into an effective position in the global economic system, has been an essential ministerial platform for discussing their common challenges in development and exploring solutions for the last three decades.

And he further noted that significant progress has been achieved in the COMCEC within the scope of its new strategy, which was adopted in 2012.

This strategy defines a new vision for member countries: to build a prosperous Islamic Ummah based on the principles of solidarity and interdependence, enhanced mobility and good governance. Accordingly, the new mission of the COMCEC is to provide a forum to produce and disseminate knowledge, share experiences and best practices, develop a common language/understanding, approximate policies in the cooperation areas to address and find solutions to member countries economic and social challenges.

The vision introduced two new instruments namely, the COMCEC Project Funding and the Working Groups Mechanism, which have been successfully operationalized since their inception in 2013.

The Turkish ambassador went on to reveal that the COMCEC Project Funding has facilitate transforming ideas into reality;  helped project owners have an international project experience; increased the ability to work together and improved the capacity of the project owner institutions.

He hoped that the signed projects would contribute to the development efforts in the OIC region, and took the opportunity to congratulate not just the project owners but also the COMCEC Coordination Office and the Development Bank of Turkey for their intensive efforts during the project selection period.

The ambassador added that the project owners and the Development Bank of Turkey will take the main responsibility at the implementation and monitoring phases of the COMCEC Project Funding.

According to him, they expect due diligence for the effective implementation of project activities in line with the time-tables stated in project documents, so that they could swiftly reach their expected results.

The Gambia being one of the signatory countries at the signing ceremony, benefitted from two COMCEC Project Funding. One Gambian project owner got financing on Enhancing Financial Literacy and Capacity Building on Islamic Financial Instruments and the other one is on Strengthening Community Resilience through Eco Tourism.