The statements of the accused persons were tendered through the 2nd and 3rd prosecution witnesses, who are all police officers namely, Inspector Salieu Gomez and Jawo Keita, without any objection from the defence.

Jawo Keita a resident of Mandina village told the court that he obtained three voluntary and one cautionary statements from both Lt. Colonel Mam Matarr Secka and Major Kuluteh, in the presence of an independent witness.

The witness added that the 3rd accused told him that he was suffering from stress, that was why he could not write his statement, when counsel put it to him that he (Jawo Keita) wrote his client's statement.

He added that he could not remember the time he recorded the said statement, when counsel further asked.

The prosecution witness told the court that Sillaba Samateh was also confronted with the 3rd accused before the panel.

The police officer also admitted that the contents of the exhibit P5 was obtained during the confrontation.

The prosecution witness denied hearing PW1 informing the panel that the 1st accused should meet the Director General of the NIA, and the 3rd accused at Kotu Police Station, when counsel told him that PW1 informed the panel about that. He also admitted taking notes during the investigation.

"Do you know that the third accused was beaten mercilessly before the statement was obtained from him," asked counsel LK Mboge, but in reply the witness said, "I don't know."

He also denied that the 3rd accused was in handcuffs while his statement was obtained from him.

"I am putting it to you that you are not telling the truth, because your evidence is bias and in favor of the state," but in response the witness said, "all what am saying is the truth."

"Are you the one who took the 3rd accused from his cell to obtained the statement from him?" asked counsel. "No, my lord. I did not personally receive him from the cell," replied the witness.

"Do you know a cell at the NIA called Babadinka," asked counsel LK Mboge. The witness in response said he did not know.

"Do you know what stress the 3rd accused has gone through until he could not write his own statement," counsel asked. In response the witness said he did not know, but the 3rd accused knew.

"I am putting it to you that it was because of the severe beating by the ninjas at the NIA," said LK Mboge, but the witness denied that assertion.

The accused persons are on trial at the high court in Banjul before Justice Emmanuel Amadi.

They were arraigned on different counts such as abuse of office, economic crime, official corruption, and sedition, among others, at the high court in Banjul. 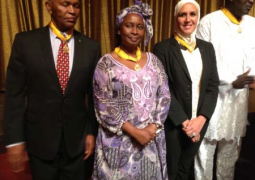