The Chief Executive Officer of The Block Entertainment Music Group, one of the leading and most successful music labels and studios in The Gambia, Mohawk aka Rap Khalifa, recently visited Dakar to look for more partnership and promotion in the music scene in Senegal, aimed at taking Gambian music to the next level.

Muhammed Kah, who goes by his music name Mohawk, has signed a lot of rising young Gambian artistes under his music label, Block Entertainment, and is now focusing on marketing them internationally. Mohawk is a producer, DJ, entrepreneur and currently the CEO of Block Entertainment Group.

Mohawk started his music career in late 1996 with the group, Da Fugitivz, hoping to take Gambian music to higher heights, That was the reason why he was on a promotional tour in Dakar, Senegal.

“Our aim is to sell Gambian artistes and music to the international. We are here in Dakar for a business trip, as well as holiday for my crew. Recently, we had a mix tape launching, and we deem it necessary to relax, make music promotions and contacts, as well as my coming events. Thou it was hard coming from Gambia to Senegal, it was a success. The trip was successful, because before I came I had contacted friends and partners here...So when I came I had some meetings and business agreements with them.”

He described the recent mix tape launching as “successful and the best mix tape launch in Gambia in 2014,” adding that the stage deco was “excellent” with “a spectacular performance.”

“I am working on the launching of my album; that is one of the reasons I came here for some promotional activities, because I will launch it in March 2015.

“I want to involve Senegalese and some international artistes. We started the album in London, and want to finish it in Senegal. I did a song with Musa Ngum. We have a lot plans for Gambian music in the pipeline,” he said.

Mohawk said Gambians artistes could reach the next level. As he put it: “We have the talent.”

“All we need now is professionals in market, because when it comes to Senegal it is only the professionals that are in the game. In The Gambia, if we leave everything in hands of the non-professionals nothing will work, because they do not know what they are doing.

“Artistes know how to sing and rap, but when it comes to producing it, they do not know much about that... So they have to leave that side with the professionals. Professionals are the ones that can take music to another level. This is the reason why Gambian music is not reaching that far.

“A professional artiste needs a producer, manager, and a public relations officer; with these you will be there.Gambian artistes can reach there because we have talents; all we need to do is work hard. So if you break through in Senegal, you break through internationally.”

Mohawk holds a degree from University of Birmingham in sound technology, and said the Gambian music scene needs more professionals, which he described as ‘something important.’

Mohawk was in Dakar alongside his artiste signees OG Log, Kesh and the manager of Block Entertainment Music Group, Panchang. 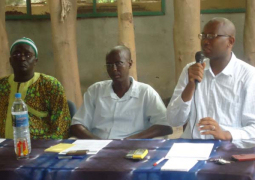