John Mixwawl Swindon, a football technician, has vowed to bring the best out of Gambian footballers, saying the country's future in football is bright.

The 59-year-old English technician came to the end of his two-week stay in where he helped to train Gambians on various disciplines of the beautiful game.

Ten years ago set up a charity called Kitaid, which has been helping kids to develop skills in football.

Speaking to this reporter at the end of his sojourn in The Gambia, said he found it interesting working with Gambian kids on every aspects of the game. He is however optimistic that the country's football is catching up with other established football nations in the world, although he was quick to admit that a lot more need to be done.

Swindon, set to return to the today, said: "Gambian game is very quick; there are lots of fast players who are so used to playing very fast football so much so that they find it very difficult to slow down the tempo of the game even when there is need to slow down the game."

Despite pointing fingers at some of the weaknesses of Gambian football, hailed Gambian kids for their wonderful performance and show of talents during his stay with them as well as the goalkeepers, saying the gloves men did extremely well in terms of their timing, saves and other aspects during the learning period.

He also heaped praises on some of the players for "their significant Improvements" on long range shots, passes, free-kicks and a host of other areas on which training was carried out.

Swindon promised to return to in November to continue training Gambian kids on other aspects of the game. 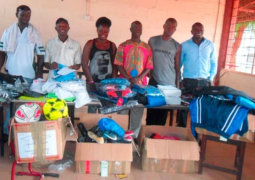