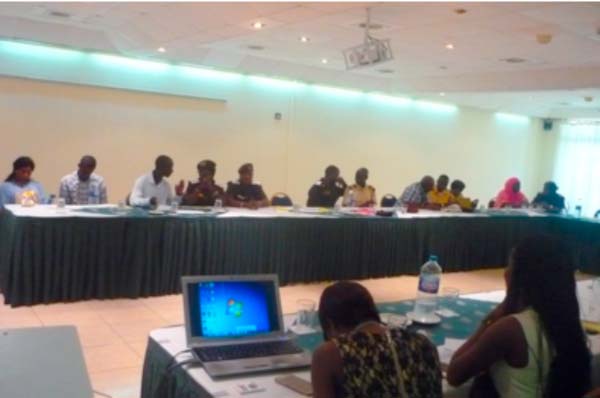 The Child Rights Unit of the Ministry of Justice with support from UNICEF on 12 October 2016 held a one-day sensitisation workshop on the practice of FGM/C for Immigration officers drawn from all regions across the country to ensure the effective upholding of the law.

The sensitisation was organised premised on the fact that as security officials tasked with enforcing the law and thereby frequently interacting with communities, it is important to bring the provision to their attention together with the effect of FGM/C and the need to eradicate it.

Speaking at the opening ceremony held at the Kairaba Beach Hotel, UNICEF Resident Representative, Mrs Sara Beysolow Nyanti, commended the Ministry of Justice for its leadership in moving forward the child rights agenda through the training of Immigration Officers.

She described the day as a landmark event and signalled a significant evolution in the collective quest to ensure the fulfilment of the rights of children in The Gambia.

She said the day demonstrates the government’s enhanced understanding of the need for a multisectoral response to addressing FGM/C.

If the practice will be abandoned, it will require everybody to play their role, she said.

“Every year, globally, millions of girls and women are subjected to FGM/C. which not only violates their basic human rights, but also denies them their integrity and their right to freedom from violence and discrimination,” she remarked.

Victims and survivors of FGM/C will suffer disproportionately from pain through systematic cutting, health complications, social and economic vulnerability and lack of access to basic services, according to her.

In many countries, despite the existence of legal mechanisms to oversee FGM/C, challenges and limitations in implementation persist and are primarily due to a lack of resources, skilled personnel, appropriate documentation, as well as weak organizational capacity, she went on.

In The Gambia, 75 per cent of girls and women aged 15 to 49 years have undergone FGM/C, she said, adding: “For some regions and ethnic groups, the prevalence rate is even higher with more than 90 per cent of women affected.”

UNICEF and UNFPA are supporting efforts to ensure a reduction in FGM/C incidents and to ensure that girls are given a greater chance of fulfilling their fullest development potentials.

UNICEF and UNFPA will continue to support the Government, civil society organisations, and other development partners working towards the promotion and protection of children and women, she said.

“UNICEF also remains fully committed and ready to work together with all our partners towards addressing challenges in Child Protection that affect the children and women of The Gambia.”