The criminal trial involving Astou Jeng could not proceed yesterday before principal magistrate Omar Cham of the Brikama Magistrates’ Court due to the non-availability of the medical report.

It would be recalled that the accused, Astou Jeng, was first arraigned before the Brikama Magistrates Court after she was indicted on a single count of attempted murder.

The prosecution alleged that the accused on 16  March 2017, at Brikama Sanchaba, unlawfully attempted to kill one Alhajie Secka (the accused husband) by pouring petrol on him and setting him ablaze, causing him serious bodily harm.

The prosecution led by Sgt Jammeh called Alhajie Secka, the husband of the accused person who was hospitalized and had been receiving treatment at the Edward Francis Small Teaching Hospital had testified as the first prosecution witness.

The matter was then adjourned for the prosecution to tender the medical report.

When the matter came up yesterday, the prosecuting police officer informed the court that the medical report was not available, noting that the medical officer who was supposed to issue the report was out of the jurisdiction and would be back in the next few days.

He craved the court’s indulgence to grant the prosecution a short adjournment.

The matter was then adjourned until 5 July 2017, for continuation of hearing after the defence counsel, Pa Harry Jammeh, raised no objection to the prosecution application for an adjournment.

He noted that both his client (the accused) and the victim needed time to recuperate. 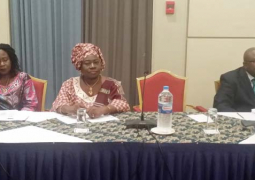