Young Stars FC would clash with Bakoteh Estate FC in the opening game of the qualification at the Father Gough Sports Complex in Manjai Kunda in the 3pm kick-off.

Fajara South FC will lock horns with Democracy FC the same day, in the 5pm encounter.

Five teams will then qualify from the qualification stages and would play in the play-off against the three teams that were relegated last season.

The four teams that would qualify from the play-off will join the sixteen teams in the Nawetaan proper, meaning twenty teams will battle it out in this year's Manjai Kunda Youth Development Association Sports Committee Nawetaan proper championship.

It could be recalled that four teams were relegated but one of the relegated teams West Bi FC from Kololi was suspended from this year's Nawetaan proper.

Speaking to Abdoulie Jallow, the Chairman of Manjai Kunda Youth Development Association Sports Committee, he urged teams within the zone to work hand-in-hand with the association for the development of sports.

He also appealed for assistance from the public, companies, parastatals and individuals to come to the aid of committee. 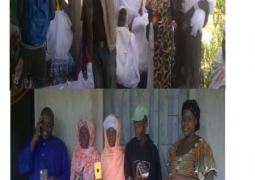 Our leaders need to do their part