The game, which produced a low turnout, was dominated by Makan Bi, who frenetically assaulted Old Hands with goal-scoring attacks.

Their efforts earned them four outstanding goals to register a famous victory over the scrappy Old Hands side and snatch the maximum points.

The Tuesday win over Old Hands has boosted Makan Bi’s hopes of qualifying for the knockout phase of the Banjul Nawettan competition.

Meanwhile, Kanifing United have maintained their superb run of form in the 2013-2014 Serrekunda West Nawettan after thumping Old Hands 3-0 at the Serrekunda West Mini Stadium on Tuesday.

Samger striker Aziz Mendy, Muhammed Kabba and Abdoulie Jallow were on target for Kanifing United in the 22nd, 60th and 70th minutes of the game to give their side a convincing win over Old Hands. 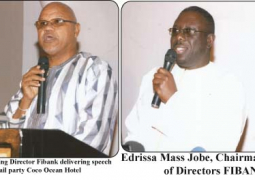