We have been told recently that The Gambia’s Real GDP growth is projected at 7.5 per cent in 2014 predicated on robust expansion of agriculture and services, particularly tourism, which means the country’s economy is somewhat on a fine footing for 2014.

Inflation is also forecast to moderate to within the target of 5.0 per cent by end-December 2014 but this is premised on prudent implementation of monetary and fiscal policies.

This inflationary speculation, according to the Central Bank of The Gambia (CBG), is subject to several upside risks emanating both from the external environment and the domestic economy. The most important risks, it says, are higher-than-expected oil prices and fiscal and exchange rate pressures.

This considerable increase of domestic debt is mainly accelerated by the increasing budget deficit the economy continues to grapple with, such as a deficit of D2.7 billion (8.0% of GDP) in 2013, higher than the deficit of D1.3 billion (5.9% of GDP) in 2012, which, to a large extent, is triggered by Government fiscal operations resulting in significant increase in expenditure and lending while revenue and grants continued to go the other way.

An excerpt of the details pertaining to this trend is as follows, according to facts put out by the CBG: “Provisional data on the execution of the 2013 budget show that total revenue and grants amounted to D5.9 billion (17.5 per cent of GDP), below the target  of D7.7 billion (20.0 per cent of GDP). Domestic revenue, comprising both tax and non-tax revenue, increased by 10.6 per cent to D5.2 billion, D4.6 billion of which was on account of international trade  taxes. Grants, on the other hand, declined significantly from D1.8 billion in 2012 to D725.1 million in 2013.

Studies have shown that increased debt burden induces a decline in investment, creates problems for effective debt management, causes monetary and economic instability, among other effects.

While overall balance of payment (BOP) is estimated at a deficit of US$32.9 million in the first nine months of 2013, lower than the deficit of $41.7 million in the corresponding period of 2012, the volume of transactions in the foreign exchange market in the year to end-December 2013 decreased to US$1.31 billion or 17.0 per cent from 2012.

Gross international reserves amounted to US$170.3 million, equivalent to 4.1 months of import cover, down from US$195.8 million a year ago.

It is also stated that although the Dalasi was broadly stable in the first half of 2013, it depreciated significantly in the second half of the year.

The depreciation of the Dalasi, according to the CBG, was partly as a result of reduced foreign exchange receipts, coupled with strong demand owing in part to the high level of liquidity in the economy.

This brings us back to the prudent forecast of the Central Bank Governor, Amadou Colley,  who states that inflation is forecast  to moderate to within  the target of 5.0 per cent by end-December 2014 ‘premised on prudent  implementation of monetary and fiscal policies”.

He says: “The outlook to inflation is subject to several upside risks emanating both from the external environment and the domestic economy. The most important risks are higher-than-expected oil prices and fiscal and exchange rate pressures.” 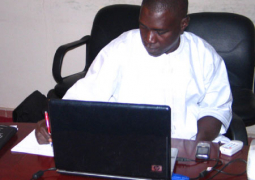