The community of Latrikunda German recently held a sensitization forum ahead of the 2014 polio vaccination campaign, which is set to target children from zero to five years of age throughout the nation.

The gathering organized by the community’s executive members and held at the Ahmed Health Center in Latrikunda German, was geared towards informing the community of the upcoming polio vaccination campaign.

The vaccination campaign which is in two phases is set to commence from 19 to 22 September, as well as from 31 October to 3 November 2014, respectively.

During the meeting, the community’s alkalo, Alhagie M. O. Faal, urged community representatives to further disseminate the information to their neighbourhood.

Talking about the significance of the campaign, Mr Faal appealed for the cooperation of the people, especially mothers and urged them to come out in large numbers for the well-being of their children.

He thanked the Gambia government and UNICEF for their partnership in ensuring the health of the nation.

As an alkalo together with other stakeholders, they have the responsibility to call on people in their community and advise them on such issues, and hoped they would respond for the safety and health of their children.

The APRC chairman for Serrekunda West Constituency, Alhagie Bakary E. Jammeh, urged mothers and the community to take the polio vaccination seriously, for the benefit of the children.

Latrikunda German Ward Councillor Jerreh Sanneh, among others, spoke at the gathering. 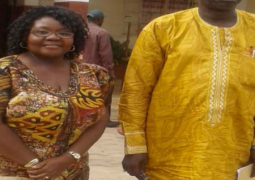