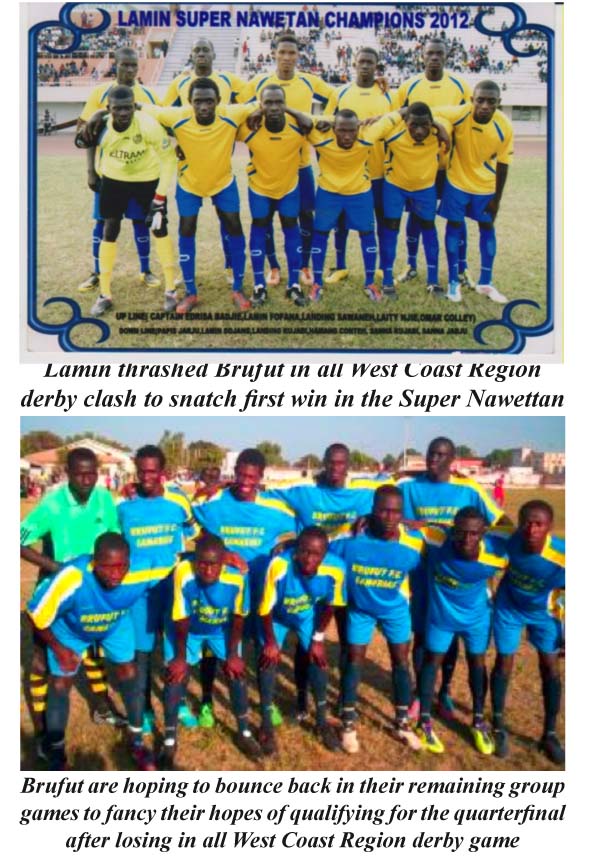 Lamin opened the scores through Gamtel winger wizard Hamang Conteh in the 50th minute of the game from the penalty spot to give his side the lead.

Former Gamtel striker Ousainou Manneh sealed the victory in the 68th minute of the game from an excellent header from a corner spot to send Lamin to their first victory in the 2014 Premier Games-sponsored Super Nawettan zonal football championship.

Elsewhere, Manjai thrashed whipping boys Serrekunda Central on the same score-line at the Father Gough Sports Complex in Manjai on the same day to grab their first win in the championship.

Lamin and Manjai are leading group A with maximum 3 points each in one game and are hoping to win their remaining group games to boost their hopes of qualifying for the quarterfinals.

Banjul and the 2013 super nawetan champions Serrekunda West are 3rd and 4th places respectively with a single point each in one game, and aim to win their remaining group games to fancy their chances of making it to the quarterfinal.

Brufut and Serrekunda Central are currently rooted at 2nd place from bottom and bottom place respectively with zero point in one outing and are hoping to bounce back to improve their hopes of qualifying for the quarterfinal.

Duo convicted for burglary and theft