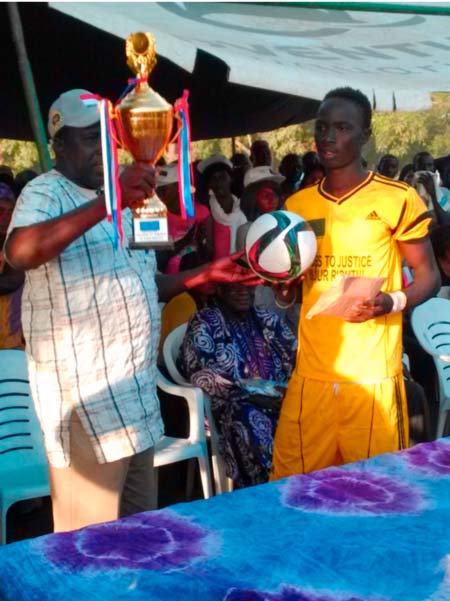 The Noran tournament funded by the European Union and held in Kwinella was the second following the first which was held in Brikama.

Kwinella FC’s Captain Bakary Sanneh scored the only goal of the game for his side in the 72nd minute of the game from a long fine header.

The final of the tournament was attended by Governor LRR Salifu Puye, Chief of Kiang Central District Alhaji Demba Sanyang, lawyer Fafa Mbai among others.

Each of the participating team was given a set of jerseys and a football and supporters of each team were also given scuffs, caps and T-Shirts with the slogan: “Access to Justice is Your Right”.

“The tournament was not necessarily about winning but about the impact that comes after it, because the target for the tournament was the youth but we saw the impressive turnout of people with even old women coming out to witness the matches,” GFF technical director Manneh told reporters.

He described football as a tool for mobilization and sending of message across, adding that the legacy for the tournament would live with the teams, society and even beyond the boundaries of LRR thus hoping that all those that played during tournament will be agents of the project.

GFF technical director Manneh also sent his appreciation to all those who graced the final, including the Chief of Kiang Central District who is a citizen of Kwinella village, Alhaji Demba Sanyang, LRR Governor Salifu Puye and the Station Officer of Kwinella Police Post for providing security during the tournament.

Isatou Bittaye, Senior Program Officer of NCCE, also spoke to waiting reporters, saying the reason for the tournament was to get the attention of young people because NCCE realised that young people had not got the civic education messages as expected.

“We felt that it is only through sport that young people can get NCCE messages; this is why we organised this tournament for the young people of LRR, especially the youth of Kiang Central District,” Madam Bittaye indicated.

She said they have realized that there are two main things in which young people are interested in and these are ‘Sports and Music”, which is why they decided to organize ‘Access to justice football tournament’ for the young people of Kiang West Central District.

According to Madam Bittaye, they did the outreach tournament so they could educate and sensitize the youth of their rights by having access to justice and legal education.

This is all about contributing to national development, she said, adding that the tournament was successful.

He commended the communities of Kwinella and surrounding villages for their support to them during the period of the tournament.

The participation of all and sundry in the region will be enhanced by making sure the goal of the project is achieved, she said, while urging the youth to spread the message to others so the project would stay within them.

The Noran tournament, according to Madam Bittaye, was hosted by Kwinella village in Kiang Central District of Lower River Region to sensitize the youth in the district for them to know their civic rights.