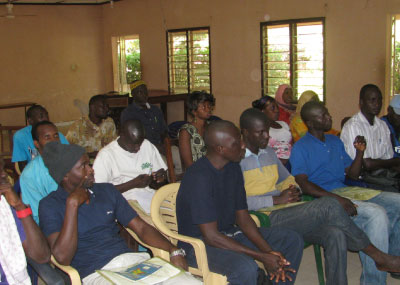 The forum, organised in collaboration with Child Fund The Gambia, under the PROTECT project, was held at Mari Bennet Skills Training Centre in Welingara, West Coast Region.

According to officials, the PROTECT project is a two-year project led by Child Fund The Gambia, with the aim of developing a national child protection system for prevention and response to child-trafficking in The Gambia.

Speaking at the officials opening of the forum, Mr. Dembo Kuyateh, said children are assets to the nation. And as such, he said, it is the responsibility of all and sundry to ensure that they are protected from all forms of violations, including child-trafficking and child labour.

He said PROTECT project under the Child Fund The Gambia is a two-year project, aimed at combating child-trafficking, through capacitating district stakeholders on how to prevent and respond to child-trafficking at local and national levels.

“Child trafficking which is a cause for concern in many countries in the world, has become a viable business for unscrupulous people because of the motive best known to them,” he added.

He said the federation supports youth empowerment by capacitating the youth on social entrepreneurship, training on infant formula production, and support farmers to boost their production, among others.

For his part, Mr. Siaka K. Dibba, the lead trainer at the forum, underscored the crucial role played by PROTECT project of Child Fund The Gambia and key government partners, such as the Ministry of Justice, Department of Social Welfare, the Gambia Immigration Department, law enforcement agencies, NGOs and other local stakeholder in promulgating the end to child trafficking in The Gambia.

He said about 100 district stakeholders were trained on the subject, noting that it has yielded dividend as they have gained some techniques on prevention and response to child-trafficking and other child related violations.

While stating that it’s a part of the many training programmes, he said most of the participants at the beginning of the training thought child trafficking does not exist; even though reports had indicated that it indeed exists.

“At the beginning of any training we conduct a pre-test to measure the level of their (participants) understanding to determine what approaches should be used to train that set of participants,” he added.

Alh. Karamo Ceesay, a participant from Wullinkama village, said the training was timely as they had a series of lost child announcements on radios and in newspapers.

According to him, children are future leaders and their protection and security should not be left in the hands of the government, but a collective responsibility.

While thanking Child Fund for providing the strategic support, he commended Kombo North Federation for their hard work and steadfastness.