He added that the two teams have undergone intensive training in preparation for the final over the past two weeks.

Kafuta FC beat Giboro Koto 2-1, while Pirang FC surprised Farababantang by a goal to nil in the semi-finals.

The tournament brought together twelve villages within the district. 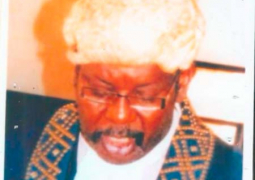 DR. CARROL (M.R.G.) OFF TO GHANA FOR U.N. STATELESSNESS TRAINING

The Coach: Then, now & where to