Justice Wowo and Lamin A.M.S. Jobarteh were arraigned on a thirteen-count indictment which included abuse of office, conspiracy to defeat Justice  and interference with witnesses, offences relating to Judicial proceeding, to giving false informing to a public officer, charges they denied.

Delivering the ruling, the trial judge indicated that at the close of the prosecution case in the matter, the defence raised and argued a no-case-to-answer on behalf of the accused persons herein, urging that the 1st accused had no case to answer.

Borry Touray counsel for the 2nd accused adopted and relied on the submission of Mr Achigbue only with a few additional remarks, urging upon the court to also discharge and acquit the 2nd accused person.

Justice Nkea added that the central issue in the ruling, therefore, was whether the accused persons should be exempted from calling any evidence in their defence, thus necessitating their discharge and acquittal.

“The defence has sought to impinge the prosecution case by attacking the charges mainly on legal grounds. The legal issues were many, and I now proceed to deal with them before proceeding to determine whether, on the evidence adduced, the prosecution has made out a prima facie case,” the judge said.

“A submission was made by counsel for the 1st accused in terms of sections 121 and 123 of the 1997 constitution to suggest that this court lacks jurisdiction to inquire into allegations complained of counts V-Xll of the bill of the indictment against the 1st accused, and it was contended that the 1st accused is absolved from any criminal liability because the acts complained of in these charges were done in exercise of his judicial function as a judge,” he added.

Still reading the ruling, the judge stated that the learned prosecuting counsel, Mr Legenju, in his response to this issue, argued that for the immunity in section 123 of the constitution to avail the 1st accused person, it must be demonstrated that he acted in good faith.

Judicial immunity was not an end in itself, but served the independence of the judge who should be able to decide cases without fearing civil or criminal liability for judicial adjudication done in good faith, he went on.

“Now for section 123 of the constitution to inure to the benefit of any one, it must be shown that the person is a judicial officer, but also his acts or omission were in exercise of his judicial function; thus, the act or omission complained of must necessarily be of a judicial nature and the act or omission must be in good faith, so being a sitting judge per se does not absolve a person from criminal or civil liability,” added the judge.

“Since these are some of the live issues in this trial, it seems to me that, this court has the jurisdiction to inquire whether the acts complained of against the 1st accused in counts V-Xll of the bill of the indictment were acts of a judicial nature, but also whether the powers were exercise in good faith. From the foregoing, I hold that this aspect of the submission lacks merit and the same is hereby dismissed,” Justice Nkea stated.

As a related submission, he went on; it had been argued that by requesting the National Intelligence Agency, NIA, to investigate the allegation contained in letter written to the NIA by the 1st accused actually called for an inquiry to determine a fact.

His allegation, he continued, it was submitted, could not, and did not amount to a statement of fact so as to give rise to an action for giving false information under section 114 of the Criminal Code.

“Information in it ordinary grammatical sense is knowledge communicated or received concerning a particular fact or circumstance, or something told or fact learned. The qualification any information in section 114  of the criminal code are not restrictive and do not expressly excluded information contained in a request for investigation; what is of material relevance under section 114 (supra)  is the knowledge or belief of the accused when he acted,” he adduced.

So whether the 1st accused prepared the complaint to the NIA in the knowledge that the allegation contained therein were baseless or otherwise was an issue for determination by this court, and it seems that it would be necessary to require the 1st accused to shed light on this issue and since this was one of the live issues on trial in this case, it was his view that this aspect of the submission lacks merit, he stated.

He added that another head of argument that was advanced by the counsel for the 1st accused with regards to the offence in counts I - IV of the bill of the indictment was that by virtue of rule 19 Gambia Court of Appeal, arguing that an appeal was not a fresh suit and that fresh evidence could not ordinarily be adduced.

It was submitted that the 1st accused had merely stated the position of the law, and that it could not amount to an offence when a person states the law as it is, said the judge.

The prosecution in reply referred the court to rule 14 (3) on when an appeal was deemed to have been brought, and to rules 30, 35, and 36 on the power of Court of Appeal to receive fresh evidence, he stated.

“I have carefully read through the provision of the rules of court cited above, and I notice that rule 14 is titled to time limit for appealing while rule 19 is titled transmission of record,” he ruled.

Since marginal notes and short titles are all interpretative tools, and since rule 14 (3) deems an appeal as having been brought when the notice of appeal was filed, it seems to him that it would not be wrong in law to deem an appeal as pending upon filing of the notice of appeal. All that was required would be to take further administrative steps to ensure that the appeal was entered, he further stated.

Mr Legunju, in his response, submitted that the state was not constrained to first seek a declaratory order or to pursue the matter only by the way of civil law processes, but that the prosecution was at liberty to challenge the false assumption of authority by resort to either criminal or civil law processes, he said.

In summary, the judge stated that having carefully examined the totality of the evidence adduced by the prosecution thus far, it seems that the prosecution had established the required presumptive evidence, thus shifting the evidentiary burden on the defence to discharge the persuasive burden of proof.

“It is for the above reasons that the no-case submission, in my view, lacks merit. It is accordingly overruled, and the accused persons are each required to now open their defence,” Justice Nkea declared. 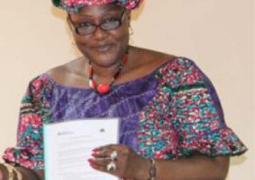