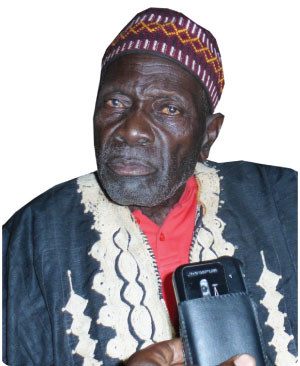 The family of journalist Chief Ebrima Manneh, a former reporter with the Daily Observer newspaper, who reportedly disappeared since July 2006, has denied claims that Manneh is in the .

“What I would like to make clear is that my son Chief Manneh is not in the . Our belief is that he is in state custody,” Sarjo Manneh, the 80-year-old father of Chief Manneh told The Point in an interview at his residence in Lamin village yesterday.

His comments came in the wake of claims by the Inspector General of Police, Yankuba Sonko, who told The Standard newspaper in an interview carried yesterday that Chief Manneh is in the .

“As far as we are concerned, the latest information we received from Interpol is that he was seen in , and that is it,” IGP Sonko said.

IGP Sonko’s comment is the latest in a series of conflicting revelations about the fate of journalist Chief Ebrima Manneh.

According to Sarjo Manneh, it is totally inexplicable that after six years since his son went missing, the authorities are now saying that he is in the .

“This is news to me; I don’t believe that my son is in the United States, because if he is there as claimed by the police, he would have contacted me, because there are many groups out there that are helping us to trace him,” Manneh told our reporter in a somber mood.

Narrating his ordeal, as tears rolled down his face, the aging Manneh described his son as the breadwinner of his family, whose disappearance he said has left the family with serious challenges.

“He was the sole breadwinner; paying the children’s school fees and doing a lot more,” he stated.

“I cannot imagine how my son disappeared in a small country like The Gambia without trace for years now; it is really frustrating,” he said, adding that the family has exhausted all means to trace their loved one, but to no avail.

While acknowledging the support the family continued to receive from the Gambia Press Union and its partners, Sarjo appealed for more support to take care of his family.

It would be recalled that journalist Chief Ebrima Manneh has not been seen since 7th July 2006 when he reportedly went missing.

It should also be noted that the Media Foundation for West Africa (MFWA) sometime ago filed a lawsuit against the Government of The Gambia at the Community Court of Justice of the Economic Community of West African States (ECOWAS) in Abuja, Nigeria, on behalf of Chief Ebrima Manneh.

The court in a judgment stated that Chief Manneh be released immediately, and be paid US$100,000 in compensation by the Gambian state.

However, the Gambia government denied knowing the whereabouts of Chief Ebrima Manneh.

In April 2009, then attorney general and Minister of Justice Marie Saine-Firdaus told parliament during Question and Answer session that the Gambia government was aggrieved by the decision of the court, and has since set the political process in motion to take the matter to the next level and get the decision set aside.