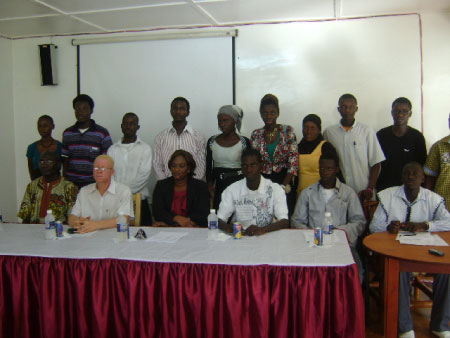 The Young Journalists Association of The Gambia (YJAG) inaugurated its newly appointed board members on Monday, at an event held at the Gambia Press Union Secretariat in Fajara.

Njundu Drammeh of Child Protection Alliance (CPA) has been appointed as the board chair. Other board members include Sam Sarr of Foroyaa Newspaper, Amie Bojang-Sissoho of Gamcotrap, Emil Touray the GPU president, Ngui-Mboob Janneh of the Female Lawyers Association of The Gambia (Flag), and Momodou Sabally of the Ministry of Finance and Economic Affairs.

The association was formed in 2007 with the objectives of promoting unity among young journalists, capacity building and addressing the welfare of its members. The new board, which will serve for two years, will be responsible for promoting the association and providing a strategic direction for its development.