President Yahya Jammeh embarked on his annual tour of the country this year under the theme: Vision 2016 - dialogue-with-the-people tour, and it has been declared the most important such tour undertaken by him, as the country’s gears up to attain his government’s declared policy objective of ceasing all rice importation by 2016.

Speaking in the North Bank Region, where he visited around 700 hectares of farmland said to be suitable for rice production, President Jammeh announced that rice production will be increased by bringing 1000 hectares annually under cultivation, in the next few years

He said this tour is an opportunity to see for himself conditions on the ground, as well as assess the country’s potential to attain food self-sufficiency.

He announced that food self-sufficiency is the goal, and the tour is an opportunity to prepare the ground for a programme of intensive rice production in the country.

There will be year-round agricultural production to ensure food security and provide employment. Diversifying agriculture; farm mechanization; encouraging the private sector to go into commercial farming; all-year round crop production making use of the country’s vast arable land and fresh water resources, including from the River Gambia for irrigated farming, are among the strategies to attain the vision.

This will also entail multiplying local rice production, through large-scale cultivation of the staple food crop on all suitable land country-wide. Rice production is traditionally an activity of women, and the government’s plan is to involve the men as well.

Consequently, this year’s tour was designed with fewer mass meetings, and more visits to farmland.

According to the government, the political will is already there, and all that remains is to mobilize the resources, both human and physical available in the country, in the drive for national food self-sufficiency. 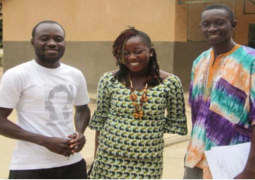