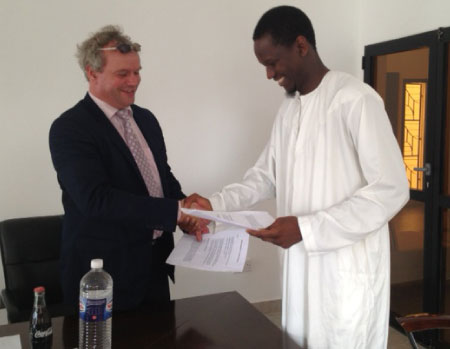 Invest Gambia, a leader for developing economic prosperity, has signed a Memorandum of Understanding (MoU) with the German Gambia Chambers of Commerce (GGCC) that seeks to among others encourage and promote cooperation between the two associations in investment, and technology transfer.

Signed at the Invest Gambia House on the Kombo Coastal Highway on Tuesday, the MoU also seeks to encourage and promote cooperation in finance, health care, education, joint ventures and collaborations on the basic of equality and mutual benefit and shall determine, by mutual agreement, and areas, subjects of such cooperation.

The agreement also recognised the immense possibilities for enhancing economic and commercial links between The Gambia, Germany and Natives German speakers in the countries of Austria, Switzerland and others.

“This is a way forward for both parties because we have seen the need for partnership for a common good,” Ebrahim Sanyang, chief executive officer of Invest Gambia, told The Point shortly after the signing.

Also wherever possible and appropriate, exchange of information and assist each other in the organization of or participation in international fairs, exhibitions and trade promotion events to be held in their respective countries and assist and encourage their members in participating in such events.

According to Sanyang, the mission of Invest Gambia is to ignite innovation, enterprise and creativity to accelerate the evolution of sustainable communities in a bid to drive economic growth and productivity across the country.

Noting that its vision for Gambia to be recognised as a world class and a paradise for investment, work, learn, visit, live among others, Sanyang assured that Invest Gambia will continue to complement government’s efforts at creating and developing economic prosperity.

Dirk Hamel, chairperson of German Gambia Chambers of Commerce, said the signing of the MOU for partnership is a win win situation for both parties, noting that this will encourage and promote education, the bilateral relationship between the two in the field of finance, health care, among others.

Noting that the agreement also seeks to promote exchange of trade missions between The Gambia, Germany, Austria and other German-speaking countries across the world, Hamel stated that this will include appropriate exchange of business information and support to each other’s organization.