The sixth defence witness, Gibril MT Ngorr Secka, yesterday testified in the treason trial involving him and seven others, before Justice Emmanuel Amadi at the High Court in Banjul.

Testifying in his defence, DW6 (Gibril Ngorr Secka) told the court that he lives at Bijilo, and was a diplomat.

From 1988, the unit was moved to the National Security Service (NSS) until 1994. After 1994, the NSS was disbanded, which gave birth to the NIA, the witness added. "I worked with the NIA, moving from one unit to another within the NIA. When I was in the NSS, I was a bodyguard to the former President," he further revealed.

In 1994, he stated, "I work with the Gambia Ports Authority as NIA Liaison Officer. I later came back to the NIA headquarters, at the counter espionage section."

DW6 further told the court that "I was the head of the political and labour unit of the NIA, then I was moved to the Foreign Affairs (Ministry) between 1998 to 2000. I later went to the Gambia High Commission in Sierra Leone, as Second Secretary, and then promoted to First Secretary, and acted as the Head of Consular," he added.

"I came back to The Gambia, and in 2004, I was promoted to Director of Operations until 2006. I was later promoted to Deputy Director General of the NIA. I was later arrested and released, and appointed Deputy Head of Mission at the Gambian Embassy in Bissau.

"I was arrested on 7th April 2006, and released on 7th July 2007," he further disclosed. "I was released based on a report by the panel that was investigating the 2006 foiled coup, that there was nothing found on me," Ngorr Secka told the court.

He further adduced, "when I received my dismissal letter, on the 5th November 2009, on the 8th November I came back to The Gambia and reported to the Permanent Secretary, as there was no reason stated in my letter of my dismissal."

"The Permanent Secretary told me to take it in good faith. Then I went to the Protocol Unit to hand over my diplomatic passport. From 8th November 2009 until on the 16th December 2009," he added, "I was in town, as I was finding out what was the reason for my dismissal.|

"On 16th December 2009, two NIA officers came to my residence in Bijilo, at 7 pm and they told me that I was needed at the NIA headquarters," he testified.

"I accompanied them to the NIA, where I was told by the Director of Operations that I should spend the night since they wanted to discuss on security issues with me," he told the court.

"I was searched and placed in a cell, until late at night when I was taken out of the cell and interrogated by four people who identified themselves as military officers. The only question they asked me was if the 1st accused was my friend, and I responded in the negative, that he is not my friend, though I know him.

"I was also asked whether I do call the 1st accused when I was in Bissau, and I responded that I have never called him from Bissau," he added.

"I told the investigators that I called the 1st accused in the Koriteh month, when I learned that he lost his late father, but could not get him. I was later returned to my cell."

He said that "on the 21st November 2010, I was again brought to face the panel comprising members of the NIA and military, and headed by the Director General of NIA."

DW6 as designated by the court adduced that he was first asked for the names of his friends he calls in The Gambia, when he was in Bissau, and he replied that, "my friends are my family."

"They again asked me whether I called the first accused, while I was in Bissau, and I replied that I only called him while I was in The Gambia to send condolence to him on the death of his late father. They asked when I last saw him, and I told them that I last saw him when the 1st accused was attending the ECOWAS security chiefs meeting in Bissau, with a view to assess the security situation in Bissau before the election.

"The panel showed me a photograph, and asked if I know the person in that photo, and answered in the negative. But they told me the person said he knows you.

"They also asked me the type of business I am doing in Bissau. I told them I am not engaged in any type of business, and that once in a while I bring along palm oil for my family?s consumption. They told me, what about drugs, and I laughed and told them that you are talking to the wrong person."

He added: "I was further asked whether I know Cachew, and I told them that I did not know wheather Cachew is a village or town in Bissau. I was also asked whether I know Samaritan Restaurant, and I told them that I know Samaritan, that I have been there with the Gambian Ambassador in Bissau, Momodou Sainey Badjie, who was appointed in July, and came there alone without his family, so I was giving him food before he settled down."

"On that day, we were searching for African food and we were directed to Samaritan Restaurant, where we bought the food and the other day I went there to buy a takeaway.

He told the court that the panel then requested him to write all what he said in a statement. He said he was also shown a picture of a man whom he did not know.

"After writing my statement, I was also told that there would be an identification parade comprising NIA officers, including investigation, security and other units. A gentleman was brought in.

"When the DG of NIA said ?bring him? and PW15 requested to brief him, I was not close to them but I was seeing them visibly," Ngorr Secka told the court.

"The gentleman came and placed his hands on my shoulders, and they asked me whether I'm satisfied and said 'No!' but I am guided by my conscience."

"I was then confronted with the gentleman at the conference room, and he started saying how I know him, and said I call him with my private number."

Ngorr Secka told the court that all what PW2 "is saying are lies and fictions of imagination. I have never seen him in my life, apart from the day we were confronted at the NIA, and second time was during the identification parade," he said.

He adduced that Kabirou Saidy never worked at the Gambian Embassy in Bissau, adding that he is a watchman at a construction site in Bissau initiated by the Embassy, where he worked and looked after materials. "He starts work from 7 pm to 7 am, and the distance is about 4 km away from the Embassy," Ngorr added.

He said Rui Jabbi never came to the embassy, and that the charges against him are "ridiculous". Ngorr Secka denied ever conspiring with anybody to stage a coup.

Ngorr Secka adduced that, on 12th February 2010, he was taken from Mile 2 Central Prison to the office of the Director of Public Prosecutions, where the DPP told him that since I was a civilian I should "not follow the soldiers."

"The DPP further told me that he wanted to give me a statement form, to tell him what exactly happened, and I will be used as a witness.

"I told him in very clear and strong terms that I cannot be a witness in something I did not know, and I further told the DPP that "I may look younger, as you might think, but I was a professional in my work, dedicated and a loyal citizen. I told the DPP that if he does not believe me, he can listen to the cassette recorded by the panel."

Ngorr Secka told the court that "I was framed," and denied all the allegations against him, adding that he does not believe that there was any coup plot, as far as he knows. 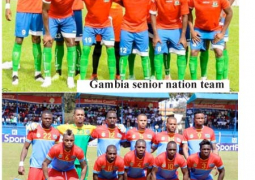