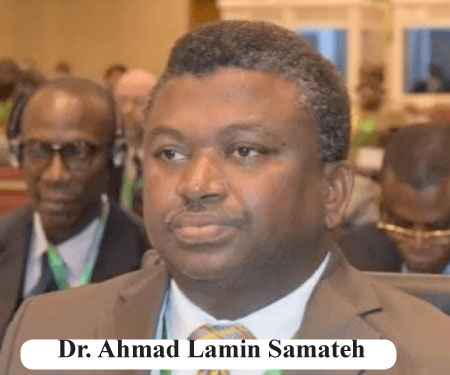 Dr. Ahmad Lamin Samateh, the minister of Health over the weekend handed two ambulances to the communities of Nema Kunka in Upper Nuimi and Njau Sawalo in Upper Saloum. He also promised to build five more health centers in the country.

The move is part of fulfilling President Adama Barrow’s Meet the People’s Tour promises to make the difference in the country’s development scope.

While presenting the ambulances, the minister stated that; “as you know the government inherited lot of challenges but nonetheless, we have started to solve them one by one because the people of the country deserve adequate healthcare service delivery.”

Dr. Samateh said healthcare is expensive and most of the equipment “we use are imported and the resources are inadequate.”He, however, added that they were doing whatever they could to ensure that the people have what they actually deserved.

Strengthening the referring system, Minister Samateh said, is very crucial, stating that a minor health center or health post where people’s conditions cannot be managed need to be transferred to other facilities and that’s why his ministry is giving out the ambulances.

“The Njau Health Post has a big catchment area as it is the only health facility in Upper Saloum, which needs assistance. The community made the request during the presidential tour and we did promise that we would provide them an ambulance; finally we delivered it to them.”

He indicated that they are advertising for the renovation and upgrading of various facilities in the country because most of the facilities that President Barrow’s government inherited were dilapidated, adding that the process had started.

He promised that towards the end of February, they would start the construction of Njau Health Center. He said the staffing issue is challenging but they are addressing it by training more people to fill the gap.

About equipment, he emphasised that UNICEF has provided equipment worth D25 million and very soon they will be distributed to all facilities around the country.

He continued that the problems in the health sector are being addressed and maternal mortality is going down, adding “if we look at the previous figure, and what is recorded now, we will find that it’s half of that.”

“We are going to strengthen regional hospitals and Essau, Bwiam, Mansakonko, Farafanni, Kuntaur, Karantaba and Basse will be part of it, and they will all be operating for women whom have problems during delivery. Hopefully this will save a lot of lives and most of these facilities have already started doing that.”

Saaba VDC hails CILSS for contributing to food self sufficiency