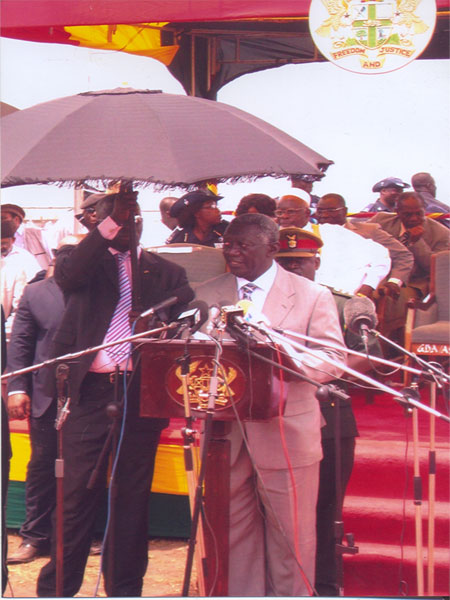 Jama'at, President of the of Address Jalsa Salana Held in

As the Ahmadiyya Muslim Jama'at celebrates the first century of Khilafat-I-Ahmadiyya (Ahmadiyya Caliphate), a regional Jalsa (convention) for West Africa, which attracted over 100,000 people from different parts of the world, was held in from Thursday 17th to Saturday 19th April 2008.

In his opening address, the Supreme Leader of the worldwide Ahamdiyya Muslim Jata'at, Hadrat Khalifatul Masih V, Mizra Masroor Ahmad (ATBA) instructed that every Ahmadi must try to improve himself and develop the qualities of absolute truth and forbearance.  He admonishes against lying, backbiting and breach of trust which, he said, lead to chaos and disorder.  Dishonesty and breach of trust does not only mean the stealing of small or large amounts or misappropriation of wealth but also includes failure to fulfill one's duties.  These evil qualities wreck a country.  He said that for an Ahmadi, love for his country is part of faith and therefore admonished every Ahmadi to put national interest at heart.  If an Ahmadi does not fulfill his duties to his nation, then he has not fulfilled a purpose for which he joined the Ahmadiyya Muslim Jata'at.  He stated that the future of is bright and the faster we work for it, the faster it will be attained.  He advised Africans to follow the examples of their great leaders like Kwame Nkrumah, who strove hard for the liberation of .  He told Ahmadis that they will save the world from the disasters that are raging from every direction.  Therefore, he said, every Ahmadi should be a master of the highest moral qualities and righteousness should be his distinctive feature.  They should excel in every field of education, the minimum target being the Nobel Prize.

Addressing the concluding session on Saturday 19th April 2008, the Khalifa highlighted the importance of seeking the forgiveness of Allah Almighty.  He said that seeking Allah's forgiveness is not limited to uttering words of repentance; a person has to make pure and firm resolve seeking God's help.  We have to nurture and take care of our hearts so that the seedlings of good work begin to sprout, he said.  He said that the founder of the Ahmadiyya Muslim Jama'at, Hadrat Mizra Ghulam Ahmad, the Promised Messiah and Imam Mahdi (peace be upon him) taught three conditions for a true repentance: a person has to shun and distance himself from foul and corrupt thoughts, he has to inculcate a feeling of shame and regret for any bad deeds that he has previously committed and he has to develop a firm resolve never to commit the sin again.  He also highlighted the roles of husbands and wives within a family.  He once again reminded the Africans that the future is bright and the time is fast approaching when will reach the level of developed nations and therefore the people have to be willing to work diligently and with honesty so that the bright future emerges rapidly.  May Allah enable leaders to rise above their vested interests for the betterment of their societies, the Khalifa prayed.

Speaking at the opening session of the convention, the President of the of , His Excellency John A. Kuffour, said that it was a pride that the first convention to mark the centenary Khilafat-I- Ahmadiyya celebrations was being held in .  He said that the theme for the convention, "Love For All, Hatred For None," could not have come at a better time.  This is the motto of the Ahmadiyya Muslim Jama'at and has also been chosen as the theme for the convention.  He said that all of mankind is one family and therefore issues like tribe, political affiliation or religious differences should not disrupt its peaceful coexistence.  Mankind should fight the common enemies like hunger, war and disease.  The President commended the Ahmadiyya Muslim Jama'at for taking the lead in this fight through the formation of humanitarian schemes which have led to the establishment of schools, health facilities and also disaster relief activities.

The concluding session was attended by the honourable Vice President of the , His Excellency Alhaji Aliu Mahama, who highlighted some of the many positive activities the Jama'at is involved with throughout the country particularly in the fields of Agriculture, Education and Health.  He also highlighted the commitment shown by the Jama'at to co-operate with other faiths for progress and development.

The convention was attended by religious leaders including the Ghanaian National Chief Imam, the only Christian Cardinal in , and a Bahai representative as well as dignitaries and government officials.  Participants came from far and wide, over thirty-two countries, including Africa, Europe, and .  A delegation of 36 people including men and women from The Gambia and Guinea Bissau led by Amir Baba F. Trawally also attended the convention.  Hadrat Khalifatul Masih V (ATBA) continued his visit to and were similar conventions were held.