The Brikama Magistrates' Court recently remanded in custody one Yaya Drammeh of Gunjur village for allegedly threatening to kill one Omar Jallow, a charge he denied.

According to the particulars of the offence, on or about the 18th September 2008 at Gunjur village the Accused Yaya Drammeh threatened to kill one Omar Jallow with a knife.

Meanwhile he was remanded at the Mile 2 State central prison until the next adjourned date.

In a separate development one Ebrima Ndure of Brikama was also recently arraigned at the Brikama Magistrates' Court charged with stealing, a charge he denied.

The alleged offence revealed that on or about 14th September 2008 at Brikama town the accused Ebrima Ndure stole a gas bottle head valued at D1500 being the property of one Samba Jallow. 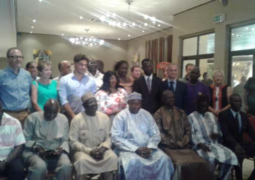