The former commissioner of domestic tax at the Gambia Revenue Authoirity, Musukebba Corr, yesterday applied for bail at the High Court in before Justice Mikalilu Abdullahi.

Musukebba Corr was remanded in custody at Mile 2 prison along with other senior officials of the institution by the magistrates’ Court for economic crimes, among others.

Her Lawyer, Awa Sisay-Sabally, told the court that there was an application issued by the registrar on 12 June 2012, for the court to make an order admitting the applicant to bail pending the hearing and determination of the trial against the applicant at the high court, and at the Banjul Magistrates’ Court.

Counsel submitted that they were served with an affidavit in opposition, but they did not concede to any paragraph of that affidavit, stating that the affidavit made it clear that the appellant was born in 1971, and spent her entire productive life working for the government of The Gambia.

She  said the affidavit further stated that the applicant is the mother of the two children, and the children were traumatized by the arrest and detention of their mother, while their father was outside of the jurisdiction, who came back and found that his wife was arrested.

Lawyer Sisay-Sabally further submitted that the applicant was not well and needed medical attention, and she was due to see a doctor at Pakala Clinic on 12 June, which she missed.

She submitted that section 25 of the Evidence Act deals with the financial budget of the , and section 24 (1) )C) of the same Act deal with the budget speech and the financial statement of the .

Counsel added that it was not in the projection of the state that they would earn D2 billion in a year, and urged the court not to look at the figures on the charged when it comes to bail, because this was a holding charge.

She said in economic crimes offences, there is a section for bail, and it laid down conditions, adding that the applicant has relatives who are respected in the society, willing and able to stand as sureties for the applicant.

“The applicant will not jump bail, and will not interfere with any of the prosecution witnesses,” she submitted, arguing that section 99 of the CPC, gives the court the power to grant bail which shall not be excessive.

“The is a developing country and none of the applicants can meet the bail bond of D2 billion that they were charged with,” counsel stated.

She submitted that her client was entitle to be admitted to bail, and urged the court to exercise its discretion in her favour.

In response, the Director of Public Prosecutions, S.H. Barkun, said the state had filed a four counter-paragraph affidavit, and they rely on the entire paragraph.

He submitted that bail was at the discretion of the court, and such discretion would be exercised by the court judiciously.

DPP further submitted that having regarded to the circumstance of the case, it was a fact that in exercising its discretion the court would rely on the facts presented before it, and in that the court could not exercise it discretion in favour of the applicant.

He added that the applicant did not prove the burden that lies on her, arguing that there was nothing before the court worth granting the applicant bail.

The state’s chief prosecutor argued that the application was not convincing to be granted bail in this matter, because in this matter they were talking of D2 billion, and the nature and gravity of the offence was high.

He then urged the court to refuse bail because granting would send wrong signals to the public, and if the government had to lose this amount, it would be detrimental to the state.

He also submitted that Mile 2 central prison has a medical facility to treat the applicant. 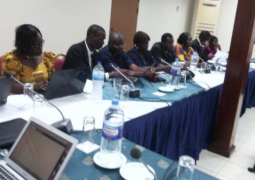