In our faithlessness, many things worry us about God and the way he exercises his power and wisdom over creation.  Such things even tend to shake the very little faith that we have.  Among the things that worry us is the way that God tolerates wicked people and even allow them to conceive and hatch some most devilish acts.  We are also worried in the way that God sometimes delays in answering prayers, and even more often than not, fails to answer them entirely, at least, in the way that we had anticipated.  Considerations of this nature have even made many people of our time to prefer to live their own lives and fight their own battles without ever waiting for God to direct them or to act for them. He is a God very slow for their likening, and sometimes doesn’t even act at all.  God’s own teaching about love and forgiveness is even more detestable to some than any other thing.  For this they will prefer to act on themselves, take their revenge immediately and care less about what God wants.  This is human wisdom, but St. Paul reminded us that God’s foolishness is better than human wisdom.  God’s own way is the way of true wisdom, it is characterized by patience, lenience, forgiveness and mercy among other similar virtues.  May the following sections of the scripture initiate us into the path of God’s wisdom:  Wisdom 12: 13-16 & 9  and  Romans 8: 26-27  and the Gospel of St. Matthew 13: 24-43.

The wickedness and evil that we see in the world is something that worries God more than it worries us.  God created a good and perfect world, a world that is free from sin and evil, but Satan, out of his wickedness and envy, by his seductive device, smuggled sin into the heart of man and of creation.  The most unfortunate things about sin is that as it enters into the world, it doesn’t stay in isolation, on the contrary, it is God’s children (whom he loves so much) that accept it and make a dwelling place for it in their hearts.  It is at this point that the problem arises which could only be efficiently handled by a matured mind like God’s.  For God to decide to eradicate sin by force will mean his smiting all his children who have been infected by sin.  This eventually means the wiping out of the whole of humanity since all men have sinned.  In showing that he is a God who cares for everything and everybody, he decided to give us the grace of repentance from sin and to give us ample time for such repentance.  The book of Wisdom declared about him:  “You govern us with great lenience, for you have only to will, and your power is there. By acting thus you have taught a lesson to your people how the virtuous man must be kind to his fellow men, and you have given your sons the good hope that after sin you will grant repentance” (Wisdom 12: 18-19).  It serves God our loving Father better to gain all his children back to himself through patience, lenience and long waiting than to lose some of them through hash and quick judgment. His message to us through whom he wants to gain most of his children back is that in relating, we should relate with patience and kindness, with lenience and love, and not with arrogance, quick judgement and hash condemnation.  It’s wise to gain, and foolish to lose.

A part of God’s lenience to us is the assistance that he gives us in our weakness, to search for him and return to him.  With his Spirit, he helps us even when our prayers are not deep enough and when our struggle to rise from our weakness is still falling short of the standard required.  St. Paul states:  “The Spirit comes to help us in our weakness.  For when we cannot choose words in order to pray properly, the Spirit himself expresses our plea in a way that could never be put into words, and God who knows everything in our hearts knows perfectly well what he means, and that the pleas of the Saints expressed by the Spirit are according to the mind of God” (Romans 8: 26-27).  In assisting us in such a way, God’s Spirit is teaching us to bear with those whose standard is very low, to exercise patience with those whose mind is very weak and to be very lenient and supportive to those whose process of repentance is both difficult and slow.

God of mercy and justice knows quite well that his children are the targets of the evil one as he came and planted wickedness in the world.  For this, he never wanted to destroy anyone of his children or to add to the frustration that the evil one has struggled into the plan of salvation by a quick destruction of the wicked ones.  To the servant who had appealed to the field owner to allow him to go and weed out the darnel that the enemy had sown in the wheat field, the latter had responded:  “No, because when you weed out the darnel you might pull up the wheat with it.  Let them both grow till the harvest, and at harvest time, I shall say to the reapers: ‘First collect the darnel and tie it in bundles to be burned, then gather the wheat into my barn’” (Mt. 13: 29-30).  That God waits with such patience and acts with such lenience until the last day makes his justice to be absolute justice which is unquestionable both by the wicked and by the virtuous alike.  Eventually when on the last day the wicked is condemned, it would be clear to him that he has been given all the chances and that his condemnation rightly resulted from his evil pattern of life which persisted even till the last day of his life.  In the same way, when the virtuous receive his reward, it would be a fountain of eternal reward that has accumulated because of his arrears of good deed until it has reached its full measure.  For this, Christ had to make the following allusion to the kingdom:  “The kingdom of heaven is like the yeast a woman took and mixed in with three measures of flour till it was leavened all through” (Mt. 13: 33).  God’s wisdom and justice are definitely demonstrated by his lenience and so the book of wisdom said the following of him:  “Your justice has its source in strength, your sovereignty over all makes you lenient to all” (Wisdom 12: 18). 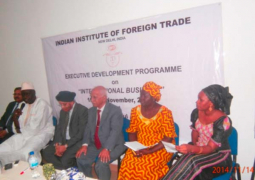