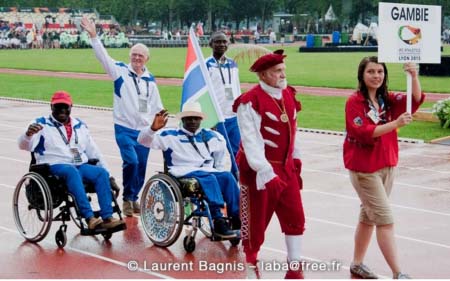 The Gambia National Paralympics Committee (GNPC) yesterday, 6 August 2013 briefed members of the media on their recent participation in the IPC Athletic World Championship held in Lyon, France, from 19 to 28 August 2013.

The committee members also briefed the media about their plans and partnerships with other countries, as well as their aim for the Rio 2016 games, among others.

Speaking at a press briefing held at the GNPC office in Kanifing, Sulayman Colley, president of the association, said The Gambia was represented by a single athlete, Demba Jarju, who took part in the 100 and 200m, adding that Jarju finished 7th position in the 100m race and 6th position in the 200m race.

He stated that the reason for filling in a single athlete was due to the high cost involved, lack of equipment and financial support.

He said their main aim was not necessarily to win medals but to take part to improve the profile of the country, gain experience, develop the athletes ahead of the Rio 2016 games, and network with other countries.

Mr Colley remarked that their focus now is on the Rio 2016 games, adding that it requires a lot of funds and equipment “which is difficult to get in the country”.

He also noted that their target for the Rio 2016 games is for The Gambia to be at least represented by 6 to 12 athletes, saying he has networked with the Brazil Paralympics Committee to support and develop both Gambia’s Paralympics athletes and technical staff.

He said they would select athletes randomly, adding that the Brazilian team is set to arrive in the country in September to train the country’s athletes and technical staff.

He said some athletes will be further selected from the random selection and taken to Brazil for further training for months all geared towards preparation for the Rio 2016 games.

He also said the Italians are willing to have exchange visits with The Gambia and to also support with equipment, adding that France, Germany and the United Arab Emirates are all willing to send each a container with equipment such as wheelchairs and other vital items for the Gambia National Paralympics Committee by December as he had already sent them the required information.

Colley said there are a lot of opportunities in the pipeline for The Gambia, adding that it is all due to their taking part in international competitions and his networking with other Paralympics Committees in the world any time he travels outside of the country as he always makes best use of his travelling and does not only travel for the sake of travelling.

They are here to represent the interest of the athletes, he also said, adding that as citizens they also have a part to play towards the development of the nation.

If they have the required equipment, financial support and encouragement needed they will fly the Gambian flag high, he said, adding that funding has always been a problem for Gambian sport but they are looking out for other sources of support and not only depending on Government as they cannot do it all alone.

He said the decentralization of Paralympics in the country is on as they have renovated some structures in some regions, adding that they also plan to have a national championship soon.

He thanked them for the gesture, saying they have a heart for The Gambia.

He also called on people to support the GNPC, saying they should not be left out as they are disabled but not unable.

“As far as life is concerned, disability is here to stay and can happen to anyone as long as there is life,” he avers, saying: “He who feels it knows it better.” 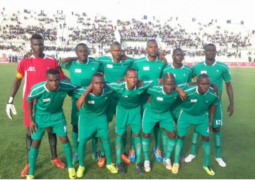