The project of the National Council for Civic Education (NCCE) to educate Village Development Committees (VDCs) and alkalolou to know their roles and responsibility is long overdue.

In North Bank alone, 200 VDCs from 50 communities are to be enlightened on local administration and the Local Government Act, 2002, which provided the legal basis for proper administration at the grassroots level.

The VDCs are established to serve as focal point for the implementation, development and management of the resources while alkalolou serve as political heads at village level.

In spite of this clear legal provision, many a time, villagers usually have confusion between the role of VDCs and that of the Alkalolou over certain developmental issues in the villages.

This makes the ongoing project of the NCCE all the more important so that officials can go to the villages and let the alkalolou and VDCs know their duties, as well as to understand their roles and responsibilities, and complement each other in serving their people.

This would help in the smooth running of villages through the active involvement of the folks in their own governance, at village level, by enabling them to take informed decisions.

Civic education is learning for effective participation in the democratic and development processes at both the local and national levels.

It is an important means for capacity development on the societal level by empowering people for effective civic engagement, an essential dimension in strengthening a society’s ability to manage its own affairs.

To cultivate an environment of democratic continuity in The Gambia, it is important that civic education is continuously given pride of place to enable all citizens fully participate in the governance process of the country.

This is the surest way to promote political and civic consciousness and the promotion of rights and freedoms of all citizens in accordance with the laws of the land.

“A popular government without popular information or the means of acquiring it is but a prologue to Farce or Tragedy or perhaps both. Knowledge will forever govern ignorance” 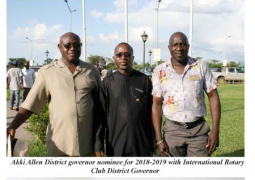